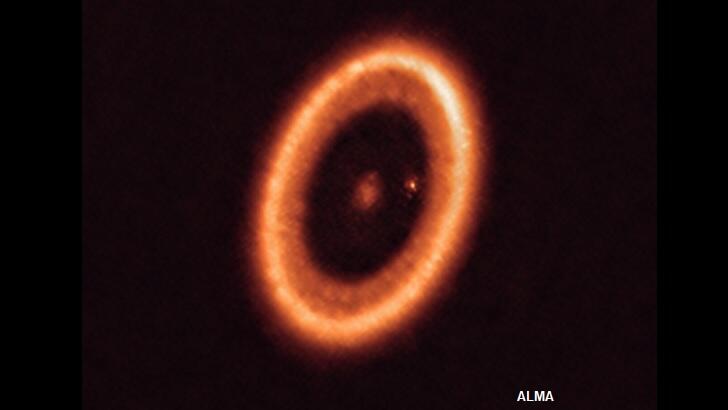 Astronomers studying distant exoplanets managed to capture the first-ever image of what is believed to be a moon-forming disc around an exoplanet. The wondrous sight was reportedly spotted by researchers stationed at the Atacama Large Millimeter/submillimeter Array (ALMA) in Chile. The remarkable ring of glowing space dust and gas surrounds an exoplanet designated 'PDS 70c,' which scientists described as a Jupiter-like alien world "orbiting a star nearly 400 light-years away."

According to the astronomers who found the formation, the diameter of the ring is around the same as the distance from Earth to the sun, which is a whopping 92,955,807. The material contained within the circular cloud is believed to be enough to create three moons about the size of the one orbiting our planet. The discovery of the disc marks the first time that researchers have been able to officially document the moon-forming process at such an early stage and, as such, the star system where it is unfolding is of particular interest to scientists.

"It is still unclear when, where, and how planets and moons form," explained ESO's Stefano Facchini, who took part in the research. However, unlike the thousands of exoplanets that have been previously found, PDS 70c happens to still be in the process of coming together and the emergence of any eventual satellites in might acquire will not occur until at some point in future. Therefore, Facchini indicated, the star system "offers us a unique opportunity" to have a proverbial front row seat to watch the process take place.