Home > Articles > Video: 'Time Traveler' Claims to Have Photograph of a Dinosaur
April 25, 2019 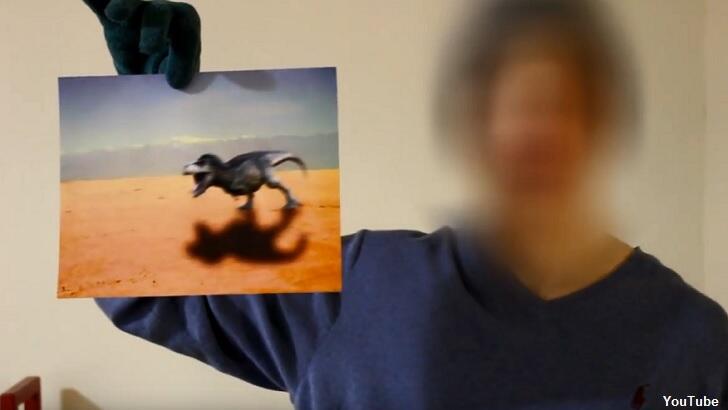 Video: 'Time Traveler' Claims to Have Photograph of a Dinosaur

A self-proclaimed 'whistleblowing time traveler' says that he journeyed to the distant past to observe dinosaurs and produced a photo purportedly showing one of the ancient creatures. The unnamed individual shared his fantastic story in a video posted online earlier this month at the YouTube channel Apex TV, which has seemingly become the premier place for loose-lipped citizens of the future to spill the proverbial beans about their journeys back and forth through time. In this particular instance, the time traveler in question was actually providing an update on his adventures after stepping out of the shadows last year when he appeared in a video in which he claimed to have gone back to the past and watched dinosaurs on Earth millions of years ago.

According to the 'future man,' he's been quite busy since the last time we heard from him as, after filming the video, he returned to his 'natural year' of 2082 and came back to our present time. He went on to assert that his job is to travel to time periods and document world-changing events as they take place. Among the historic moments that he has allegedly witnessed over the course of his time traveling career are Lincoln's delivering of the Gettysburg Address, the signing of the Declaration of Independence, and, as noted before, dinosaurs roaming the Earth.

After an interminable monologue about the nature of society in the future, the time traveler finally unveils what he says is proof that he actually went 66 million years into the past and saw the ancient reptiles that once ruled the planet. Before he shares the photo of what he contends is "a living and breathing T. Rex," the man first stresses that, contrary to our current scientific understanding, the mighty creatures were, in fact, covered in feathers and, as such, sported colorful plumage. With that caveat out of the way, the man then pulls out a photograph (seen above) showing what he alleges is a purple T. Rex.

Although the time traveler insisted that the image was not altered in any way, one can't help but be suspicious of the cartoon-like depiction of the creature in the photo. Nonetheless, the 'future man' promised that he has more pieces of time travel proof that he wants to show our modern world, but those will, of course, be produced in future video appearances. As you may have surmised by now, we're more than a little skeptical of the would-be whistleblower's fanciful tale and are left wondering if, perhaps, we've gone past 'peak time traveler,' since using a photo to prove you're from the future is so 2018.