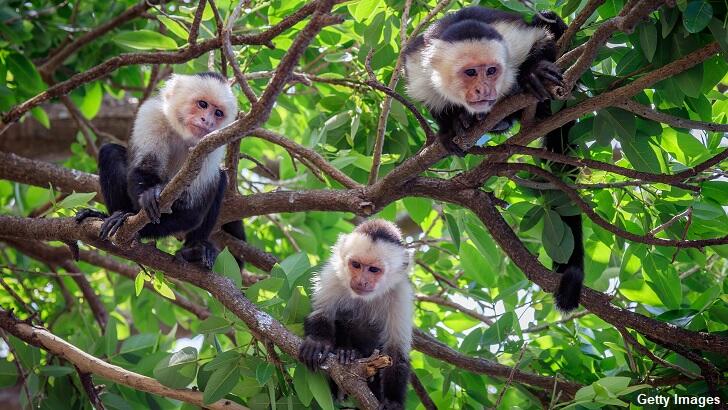 Video: Troop of Monkeys Seen Roaming Around Cemetery in Cincinnati?

In a bizarre story out of Cincinnati, authorities are on the lookout for a troop of monkeys said to have been spotted roaming around a cemetery in the city. According to a local media report, the strange sighting occurred on Wednesday evening when residents living near St. Joseph's Cemetery noticed what appeared to be five monkeys climbing some trees at the site. Although they were understandably stunned by what they were seeing, one quick-thinking witness managed to capture the very odd scene on video. In the footage, which can be seen below, several dark forms sit on the branches of a tree and the observers can be heard expressing their wonderment at the weird sight.

When cops were called to investigate, however, the monkeys were nowhere to be found, causing the case to take something of odd turn. While the authorities believe the sighting to be real, no one from the Cincinnati police department has actually seen the simians for themselves despite conducting a fairly thorough search. As such, David Orban of the Cincinnati Zoo, who is helping the investigation, mused that "there's not much we can do until we have a confirmed sighting." He also cast some doubt upon the video, noting that "numerous types of animals can occupy trees." To that end, it is rather hard to discern what exactly was filmed in the trees, though the reaction of the witnesses would seem to suggest that they were seeing something out of the ordinary.

For now, police continue to be cognizant of the possibility that there could be a troop of monkeys on the loose in the city and have advised residents not to approach the animals if they encounter them. As for where the creatures could have come from, authorities theorize that they likely escaped from the home of a private collector, since the primates at the Cincinnati Zoo all remain present in their enclosures. It remains to be seen if cops will be able to locate the creatures, much less capture them or if the case will wind up going cold and the tale of the cemetery monkeys turn into an urban legend in the city.