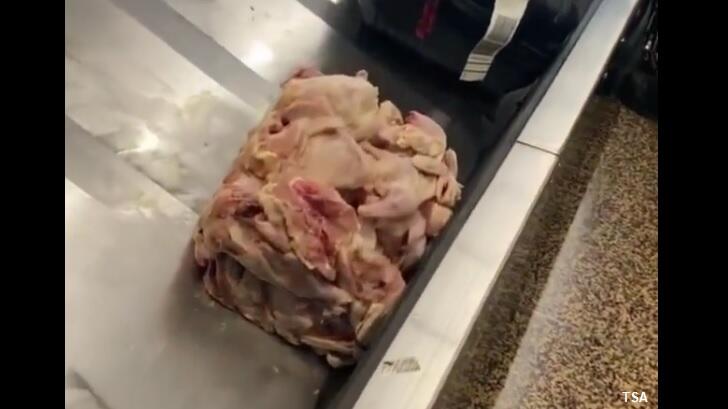 The U.S. Transportation Security Administration recently shared footage of a rather bizarre incident wherein a sizeable chunk of raw chicken was spotted on an airport conveyor belt. The very weird scene (which can be seen below) was shared on the TSA's Instagram account and was tagged as having taken place in Seattle, which would seem to suggest it occurred at the Seattle-Tacoma International Airport. Declaring the out-of-place chicken to be a "personal fowl on the carousel," the agency went on to say that it would appear that, based on the somewhat cube-like shape of the chicken, the raw poultry had been checked inside of a cooler and subsequently spilled out during the flight.

While one might think that the TSA would dissuade people from traveling with raw chicken, their bone of contention was with the method by which it was transported. "In order to keep from ruffling any feathers," they wrote, "meat should be properly packaged. Ice or dry ice is permitted to keep the flock chilled." Sadly, the TSA's video does not include the moment in which the traveler who checked the chicken discovered that it had 'escaped' the cooler, which is disappointing since one imagines that they were pretty surprised by the weird turn of events. Then again, considering that the raw meat had just intermingled with everyone else's bags, they may have smartly kept quiet about the poultry faux pas.

Strangely enough, it would seem that the case of the conveyor belt chicken was not the only food issue to pop up on the TSA's radar recently as their prior post on Instagram informed travelers that having a bag of cooked spaghetti as your carry-on item is apparently perfectly fine with the agency. "We had to double-check our travel policy on this one, because we don't want to get anyone into a saucy situation," they wrote, "but as long as your meal is filled with oodles of noodles, you can bring it along with you." While one might scoff at such an idea, bringing your own bag of spaghetti sure beats the cost of the overpriced snacks that they sell throughout the terminal.