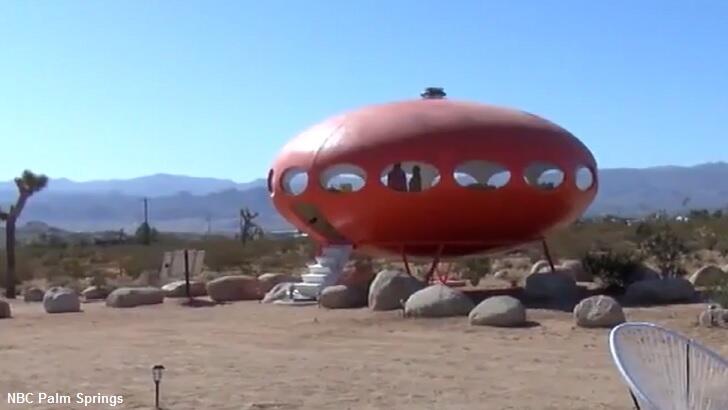 A one-of-a-kind camping experience will soon be available to people visiting southern California by way of an incredibly rare Futuro House that has been turned into an Airbnb. According to a local media report, the clever concept was the brainchild of Ronald Jackson, who owns a piece of property in Joshua Tree which he has dubbed 'Area 55.' A few years ago, he came up with the idea of adding one of the iconic flying saucer-shaped homes to the spot, but found that acquiring a Futuro House was almost as difficult as capturing a genuine UFO.

Built in the 1960s and 70s by Finnish architect Matti Suuronen, there are only 85 Futuro Houses still in existence today and the vast majority of them are located outside the United States, which is believed to be home to a mere 15 of the residences. As such, Jackson had quite the challenge on his hands when it came to both locating the people who own these rare homes and convincing one of them to sell it to him. "It was putting pieces together like I was a detective almost," he recalled "and I was able to finally get in contact with a lovely family that was willing to part ways and we worked out a deal."

While he may have managed to purchase a Futuro House, Jackson then had to figure out how to get it from Wisconsin, where it was originally located, to his property in Joshua Tree. Amazingly, he explained, "what ended up happening is that we needed two 50-foot flatbed trucks and police escort the entire way." And, once the faux flying saucer had landed at Area 55, Jackson and his family then had to renovate the entire residence as it had largely fallen into disrepair over the past few years.

After months of work, their task was completed and the rental will be open to customers starting in November. Visitors lucky enough to stay in the home will be able to boast that they slept in the only Futuro House in the world that is available to rent. The location of the residence is particularly apt as it is not too far from famed contactee landmarks like the Integratron and Giant Rock, making it the ideal place to stay for UFO enthusiasts visiting the area to see those legendary sites from flying saucer lore.