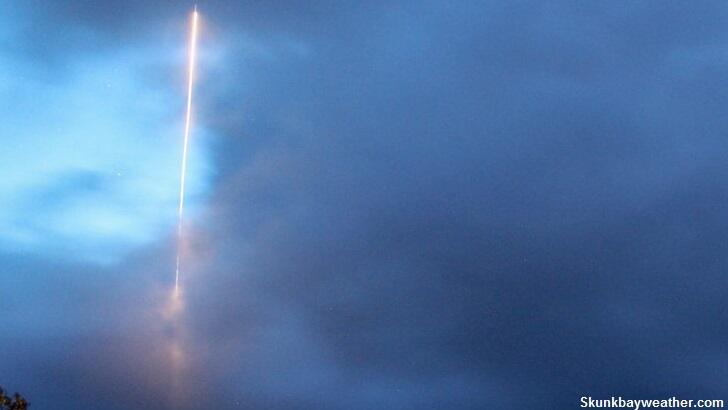 An intriguing image of an odd anomaly in the sky over Washington's Whidbey Island has had UFO enthusiasts buzzing this week, but it appears that the mystery may have already been solved. The photo, which came from a webcam operated by a website known as Skunk Bay Weather, shows a bright object seemingly ascending in a manner reminiscent of a rocket launch. The group shared the image on Twitter earlier this week and the perplexing photo set off something of a firestorm.

Speculation surrounding the nature of the object largely centered around the theory that it was an unannounced rocket or missile launch. However, the nearby Naval Air Station said that they had nothing to do with the strange event. And another suspected sources for a mystery rocket, nuclear submarine stationed in the area, also proved unlikely to be the origin of the object. As one can imagine, this led to murmurs in some corners of the UFO researcher community that it may have been something not of this world.

Alas, according to an excellent report by website The Drive, the ET hypothesis apparently does not hold up in this instance. Their thorough investigation into the image yielded what looks to be an answer to what the weird object over Washington was and the findings might be more amazing than had it been a UFO. After accounting for the exposure rate of the webcam, the direction it was pointed, and air traffic information from the time the photo was taken, it was determined that the unidentified flying object was, in fact, a helicopter.

Specifically, they say, "what you are seeing in the image is the helicopter moving away from the camera towards NAS Whidbey Island." The 'streak of light' in the sky, it is explained, comes from the long exposure of the camera and the rocket-like glow at the top is merely part of the helicopter that is also rendered unusual-looking due to the way in which the image was produced. Lest one dismiss the analysis as simply a desperate rebuttal by bewildered skeptics, there also just so happened to be a helicopter in the area where the 'rocket' was photographed at the time the image was taken.