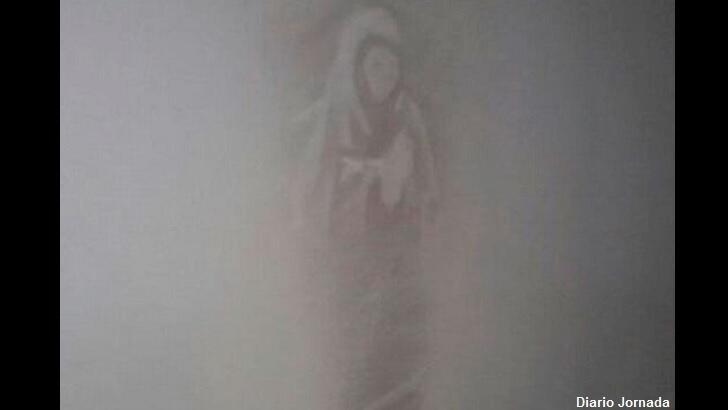 Workers at a hospital in Argentina were amazed when a discoloration that bears an uncanny resemblance to the Virgin Mary appeared on a wall.

The director of the Military Hospital of Cordoba dubbed the anomaly "a manifestation of the Mother of God" and mused that the facility is a particularly appropriate place for such an "unexpected miracle" to occur.

With that in mind, he explained that they have set aside a window of time during the day for patients' relatives to have access to the spiritual-looking stain for prayer.

As to where the discoloration may have come from, it seems that there may be a less-than-divine origin for the oddity.

Directly beneath the 'Virgin Mary' is a heater that likely provided the perfect combination of warm air and dust that eventually settled on the cold wall above it in the pattern that has mystified hospital staff.

While this may explain where the proverbial 'paint' for the image came from, one still can't help but wonder if the hand of God were wielding the 'brush.'

What's your take on the strange stain? A sign from 'above' or simply an indication that someone at the hospital should probably clean their heaters? Let us know at the Coast to Coast AM Facebook page.