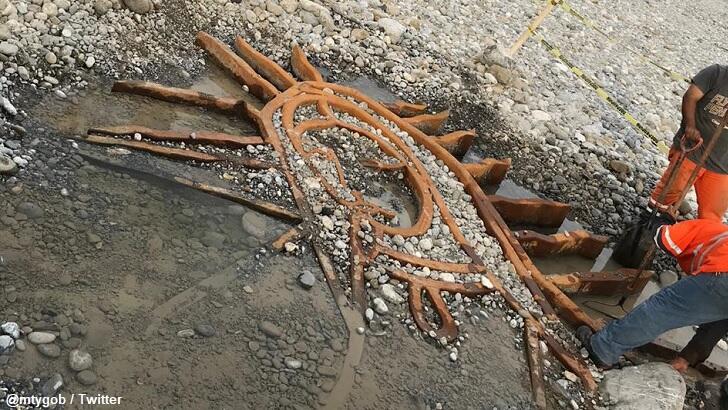 In a remarkable story out of Mexico, a statue of the Virgin Mary which was swept away by a hurricane in 2010 has been discovered a decade later in a riverbed that became exposed by yet another storm. The surprising find was reportedly made late last month when officials in the city of Monterrey were surveying the damage from Hurricane Hanna, which had recently passed through the community, and were told by residents that the iconic piece of artwork had been found sitting in the nearby Santa Catarina River.

When they went to investigate the matter, they were stunned to discover that, indeed, the massive steel monument which measures 40 feet in height and weighs approximately 11 tons was partially buried under some sand and rocks in the riverbed. As one might imagine, the reappearance of the lost statue is being seen by many as a miraculous occurrence and people have begun flocking to the area where it was found to pray, sing, and light candles in honor of the Virgin Mary.

Monterrey city officials are now working on a plan to unearth and restore the enormous statue so that it can be put on display once again. However, since the statue was replaced by a replica after it went missing back in 2010, a new spot for the artwork will need to be determined. To that end, mayor Adrián de la Garza said that they will "have to talk to the Archdiocese and to the Monterrey archbishop so that they tell us which would be the new location for the Virgin, along with the municipality, of course."