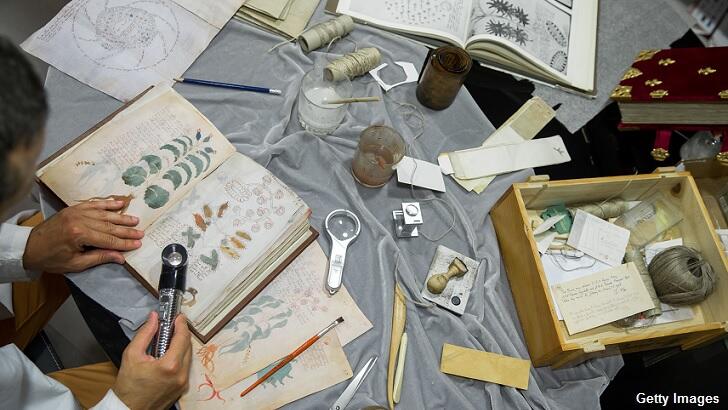 A computer scientist in Canada says that he has cracked the code of the mysterious Voynich Manuscript using artificial intelligence.

The infamous indecipherable text found in the book believed to be from the 1400's has baffled researchers since it was found in 1912.

In the ensuing years, countless researchers and cryptographers have exhaustively studied the book hoping to unravel the riddle that is the Voynich Manuscript.

And it seems that not a year goes by without someone declaring that they have finally done it, yet the mystery has endured as Voynich-ologists can never quite agree on a specific solution.

The latest entry into the fray is Greg Kondrak, a computer scientist specializing in artificial intelligence from the University of Alberta.

According to Kondrak, he and a colleague devised a method to apply their AI work to the coded text and the results were rather astounding.

They began by creating a massive data set comprised of the UN Bill of Rights translated into a whopping 380 languages.

The researchers then developed a way in which a computer could process the Voynich Manuscript and determine its core language.

Amazingly, they say, the project proved successful with the AI picking out Hebrew as the root language a jaw-dropping 97 percent of the time.

The program ultimately was able to reassemble the scrambled, vowel-less words into Hebrew text which seemed to fit together perfectly when put into a sentence with similarly-deciphered words.

For example, Kondrak claims, they were able to actually solve the first sentence of the notorious tome and say that it reads, "she made recommendations to the priest, man of the house and me and people."

A cursory look at some of the other words they've found in the book suggest that theories suggesting that it is some kind of health or medicine text appear to be on the right track.

But what may be even more remarkable is that the AI analysis is perfectly in line with a study of the book's illustrations that made headlines last year by indicating that the author was a Jewish doctor.

That these two studies coming from dramatically different perspectives could come to the same relative conclusion is particularly tantalizing.

Nonetheless, Kondrak's work is presumably now being parsed over by the fastidious Voynich research and, no doubt, adopted by those who see it fitting with their theories and discarded by those who don't.