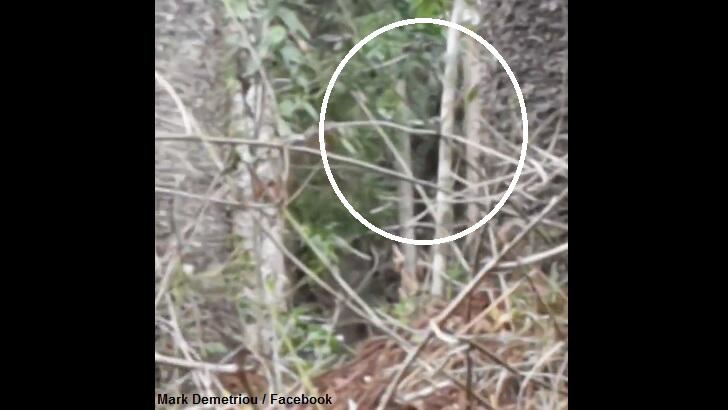 A curious piece of footage from Australia purportedly shows some kind of creature lurking in a forest and some viewers suspect that it might be the Bigfoot of Down Under, known as the Yowie. The intriguing scene, which can be seen below, was reportedly recorded by Mark Demetriou while he was panning for gold in the country's Imbil State Forest. As he was tapping out a bucket to clean it, suddenly a large log came flying towards him from the nearby woods.

Following that weird moment, Demetriou said in a post on Facebook, "I had a feeling I was being watched as the bush went silent for a few minutes." When he looked toward the area where the tossed log had originated, he recalled, there was something "large and black" looking back at him. Demetriou subsequently pulled out his cell phone and filmed the oddity and, at one point, says to the mysterious creature "I can see you looking at me. C'mon, you can come out."

Ultimately, the video concludes with Demetriou letting out an uneasy sigh and musing "man, that is scary stuff." According to the shaken witness, he left the area shortly after the strange sighting because he felt very uneasy about the whole experience. Demetriou indicated that he hoped to return to the area sometime this week to see if he could find any footprints in the mud where he believes the creature was standing. While his account is rather compelling, unfortunately it appears that the Yowie is as camera shy as its American counterpart as Demetriou's footage is fairly inconclusive.

That said, his reaction in the moment certainly seems to suggest that he was in the middle of a worrisome situation involving some kind of unpleasant creature just a few feet away from him. Considering the Yowie's aggressive reputation, he's probably lucky that, if it was the legendary beast, it did not take him up on the offer to come out of the woods or else his video may have wound up being 'found footage' rather than something posted online. What's your take on Demetriou's story? Let us know at the Coast to Coast AM Facebook page.