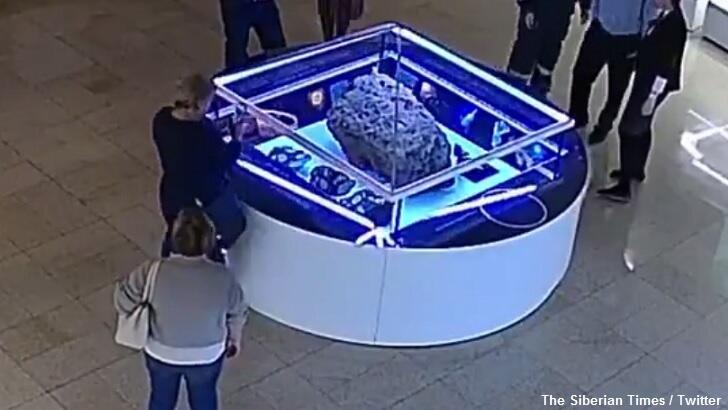 Workers at a museum in Russia are at a loss to explain a mysterious incident in which a heavy glass dome covering a massive meteorite inexplicably elevated on its own. The strange event reportedly took place this past weekend at the State Historical Museum of the Southern Urals which is located in the city of Chelyabinsk. One of the signature attractions at the site is an enormous 1,100-pound piece of a meteorite that famously fell to Earth back in 2013 and caused considerable damage to the community.

At the museum, the meteorite is housed under a rather sizeable pyramid-shaped glass dome, which became the center of a weird mystery on Saturday. As patrons were mulling around the space rock, the covering suddenly rose a few inches above the display case, setting off alarms and causing considerable consternation for museum administrators. "We spoke to all our specialists in electronics and wiring, who said unanimously that it was impossible to have it opening by itself," the museum director told a local media outlet, "yet it happened."

He went on to explain that the only way that the display could be lifted is via a remote control which was actually locked away at the time of the incident. The strange turn of events led to some museum workers jokingly offering the supernatural explanation that the meteorite was somehow sentient and looking to escape the site. Others expressed concern that perhaps the raising of the lid was a test of the facility's security system by would-be thieves with plans to pilfer the prized space rock.