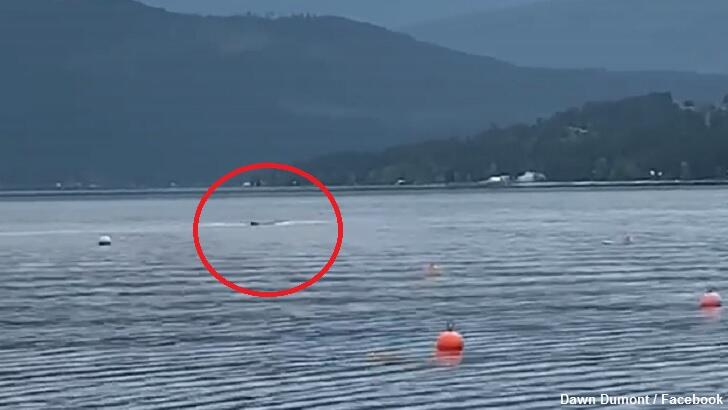 A Canadian woman captured footage of a mysterious creature emerging from a lake and some suspect that it could be the area's resident 'monster.' The intriguing sighting occurred last weekend as Dawn Dumont was walking along the shore of British Columbia's Shuswap Lake and something out of the ordinary caught her attention. Talking to a local media outlet, she recalled that "all of a sudden, I heard some splashing around off in the distance there."

When she looked out at the lake, Dumont saw what appeared to a sizeable creature of some kind seemingly swimming in the water. Astounded by what she was seeing, she pulled out her cell phone thinking "I'm going to get this on video because whatever that is, it's huge." In the footage from Dumont's encounter, she can be heard marveling at the size of the anomaly and observing "there it goes again" as the mystery beast repeatedly pops out of the water and then disappears below the surface.

Dumont's video has raised suspicions that perhaps she witnessed a legendary 'monster' said to reside in Shuswap Lake known as 'Shuswaggi.' Although fairly obscure in the annals of aquatic cryptids, the beast is well known in the region and the possibility that this was a genuine sighting was even raised by the witness herself as she watched the weirdness unfold before her eyes. The other possibility, which was also suggested by Dumont as well as some skeptical observers, is that the 'monster' could merely have been a large sturgeon as such fish are known to live in the lake.

Strangely enough, Dumont's puzzling encounter is actually the second potential Shuswaggi sighting in the last few months. Back in March, a pair of fishermen also filmed a mysterious creature in Shuswap Lake that made local headlines. One can only wonder if this is simply a matter of coincidence or an indication that the Shuswaggi is tired of playing second fiddle to British Columbia's more famous lake monster, Ogopogo, and wants to snatch a piece of the spotlight for itself.