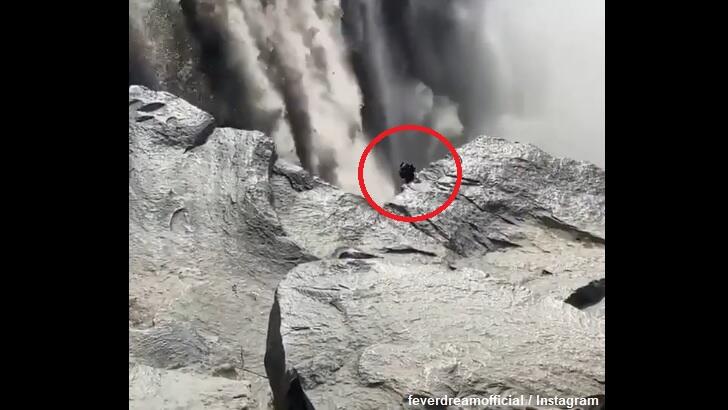 An Icelandic musician captured footage of what appears to be a mysterious creature lurking on the side of a cliff. The odd scene (which can be viewed below) was reportedly filmed by Vigdís Howser Haroardottir last week as she and her boyfriend were visiting the country's Dettifoss waterfall located in Vatnajökull National Park. Although she did not notice anything unusual at the time, she later noticed that one of the videos from her trip seemed to feature a curious interloper of some kind.

In the footage, a puzzling black form can be seen popping out from behind a cliff as the mighty waterfall roars in the background. Posting the video to her Instagram account, Haroardottir wrote that there were "no people in front of us and only a cliff so steep it could not carry anyone." Although she insisted that "I'm not saying this is an elf," the musician noted that the waterfall just happens to be located not too far from a glacial canyon that, legend has it, is the "capital city" for such entities.

To that end, given the numerous legends concerning elves in Iceland, many of Haroardottir's followers on Instagram suggested that she may have inadvertently filmed one of the entities at the cliff. More skeptical viewers, however, will likely suggest that the musician merely filmed something more prosaic than that, such as a plastic bag that had somehow gotten stuck at the spot. With that in mind, what's your take on the weird footage? Share your best guest for the nature of the anomaly at the C2C Facebook page.