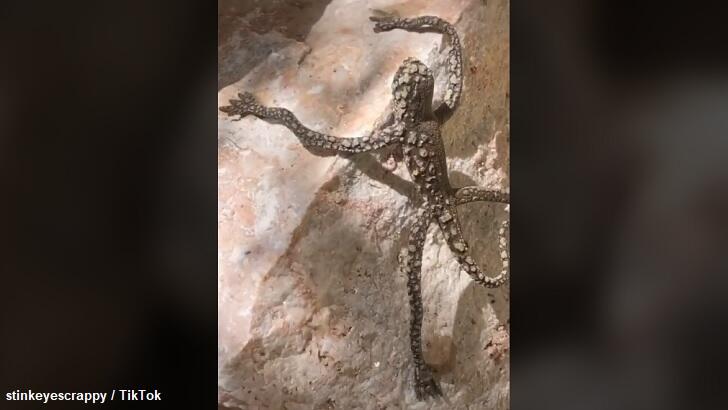 A bizarre piece of footage making the rounds online shows what appears to be some kind of lizard that sports long human-like arms. The very weird scene (which can be seen below) was posted on the popular video-sharing app TikTok last week by a user claiming to have encountered the oddity in Boulder City, Nevada. "Hopefully someone can help me figure out what this little creature is," she wrote, with the hashtag 'alien.'

In the maddeningly short video, which features an appropriately unnerving soundtrack, the strange creature can be seen seemingly clinging to a rock by way of a pair of remarkably long arms. Its skin appears to be bumpy and, for the duration of the video, the mystery animal never moves. Since being posted online, the puzzling piece of footage has amassed a staggering 2.8 million views and thousands of comments from people who are either aghast or bewildered by what they are seeing.

Attempts to discern what kind of creature is featured in the video have, so far, come up short, despite numerous individuals searching online for some kind of solution. As one might imagine, this has led to speculation from some imaginative viewers that perhaps it is extraterrestrial in nature. However, a more plausible explanation put forward by skeptics is that the 'lizard' is actually just a toy and that the video is a clever hoax. What's your take on the curious footage? Share your thoughts with us at the C2C Facebook page.