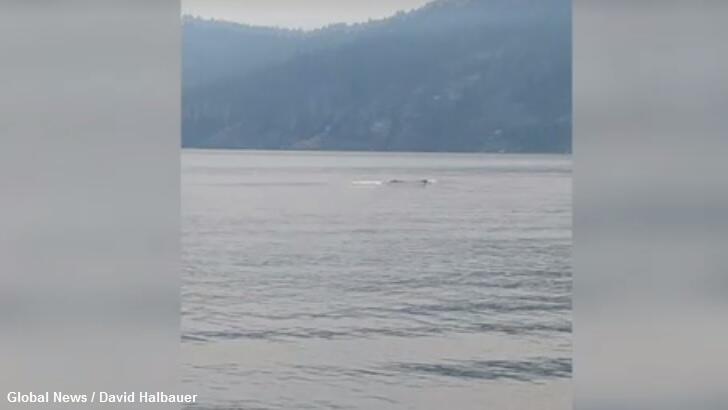 Ogopogo, a legendary creature often called the Canadian Loch Ness Monster, may have been briefly caught on film by an astounded beachgoer. David Halbauer told Canada's Global News that he was visiting British Columbia's Okanagan Lake last week with his family when their otherwise routine trip turned into something truly wondrous. According to him, the group's collective jaws dropped when they noticed a strange creature that resembled a large snake appear around 300 feet from shore.

Halbauer estimated that the oddity in Okanagan Lake looked to be about 40 to 50 feet long with a rather thick body. Reflecting on the creature's considerable girth, he mused "I don't think I could put my arms around it." During the two-minute-long sighting, Halbauer said, the monster appeared to be swimming along in the lake as it undulated in a manner where parts of the anomaly would emerge and then disappear before popping up again a few feet away.

"When you're sitting on the beach on a sunny day, you don't expect to see a dinosaur coming out of the water," he marveled. Despite his astonishment, Halbauer was quick-witted enough to grab his cell phone to record the stunning sight. Unfortunately, the sun's glare made it difficult for him to perfectly capture the creature on film and his excitement about what was happening is evident in the shaky nature of the footage. That said, the video is fairly remarkable in that it could provide a rare glimpse of the 'monster' known as Ogopogo.

Tales of a sea serpent of some kind lurking in Okanagan Lake date back centuries, originating with the native inhabitants of the area who subsequently passed along the stories to European settlers. Numerous sightings of the creature have been reported over the years to the point that the monster has gained a level of notoriety which almost rivals the Loch Ness Monster. Ogopogo, which derives its name from a 1924 song about the oddity, has been featured on postage stamps, celebrated with statues, and even adopted by a Canadian hockey team as their logo and mascot.