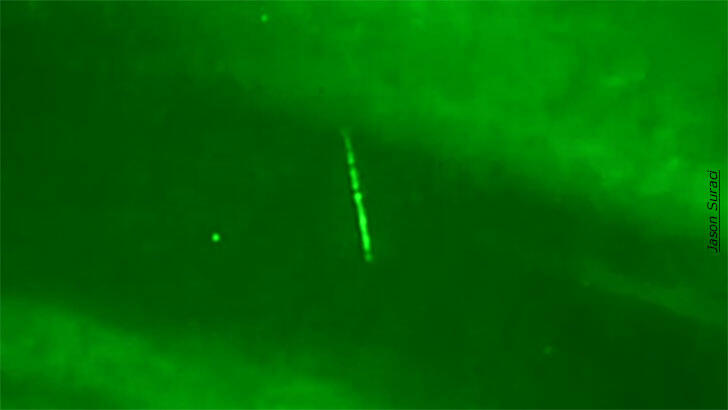 Jason Suraci had just come back from attending Joshua Warren's Finding Your Magic seminar in Las Vegas. He lives in Colorado near the Space Command Air Force base and nightly sees odd things. Jason sent Joshua Warren and Mobius videos showing that people all over the US had seen tube-like UFOs over the last few days. He was fascinated with one that was seen by the CE5 group: "ECETI Captures a Huge Craft."

Jason sent several other videos seen all over the US. Some were obvious SpaceX and some were much more mysterious. There was also a SpaceX launch that same day adding to the confusion of videos in circulation. Jason wrote both Joshua Warren and Mobius and simply stated he had made up his mind he was going out that night and was going to capture this tube-shaped UFO video footage himself.

A few hours later Jason sent his video and said he got it. Joshua, Mobius, and soon the whole UFO community was doing analysis on the video, looking up satellite tracks, rocket launches, and reviewing all data. The analysis clearly shows stars and other objects dithering through the clouds, but the tube-like UFO simply vanishes and never re-emerges. It is a very strange video and should open up a wide discussion of debate.

This is not the only strange thing Jason has captured. Please subscribe to his YouTube Channel where nightly he sees some amazingly strange sightings that equally have not been explained.