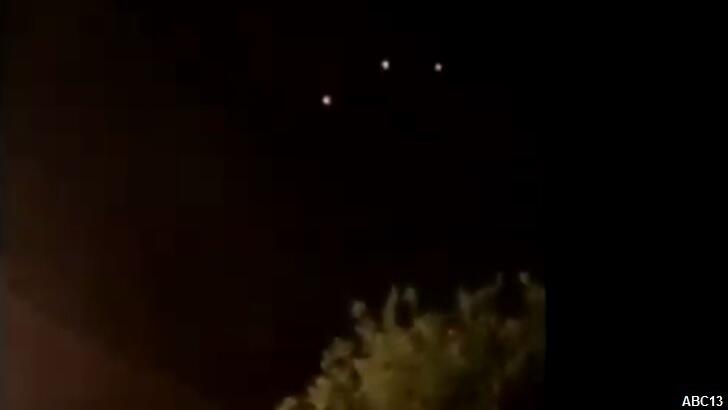 A couple in San Antonio were left scratching their heads when they spotted a trio of inexplicable lights that were seemingly connected and hovered in the night sky. The strange sighting reportedly occurred last Thursday evening when the unnamed woman and her fiancée were outside of their home and noticed the odd formation overhead. "I stood there in shock," she recalled, "until I thought to reach for my phone" and film the weird scene.

In the woman's video, she can be heard asking her fiancé "okay, what is it?" In response, the man suggests that perhaps they are looking at helicopters in the sky, but the woman is not convinced by that prosaic explanation and, instead, declares that "it's a UFO!" She goes on to observe that "it's hovering in the sky, and one of the lights disappeared."

A subsequent report sent to MUFON by the witness added a bit more detail to the incident. According to the woman, the object stayed stationary throughout the two-minute-long sighting and, intriguingly, the lights "seemed to rotate slowly as it raised higher and the lights went out one by one." She also noted that, in keeping with classic UFO cases, the mysterious craft was silent the entire time it was visible to the bewildered couple. What do you think the duo witnesses? Share your theory at the Coast to Coast AM Facebook page.