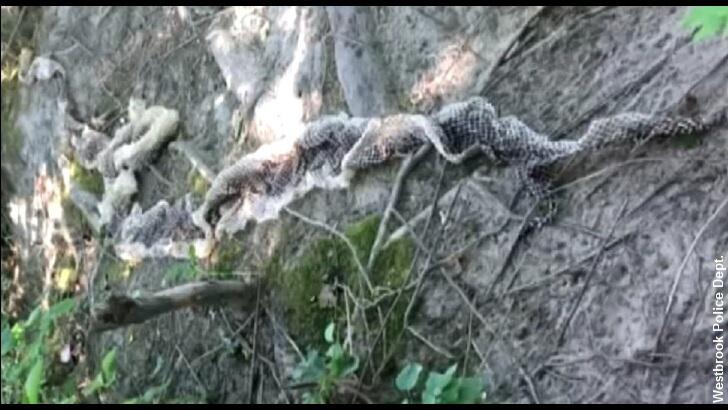 The saga surrounding a purported 10-foot-long snake said to lurk in Westbrook, Maine has seen new developments in the last few days as the story garners national attention.

Spawned by this past weekend's discovery of an enormous snake skin in the area, 'Wessie' has been the subject of worldwide headlines and drawn a considerable amount of media attention to the city of Westbrook.

Once a quaint local story that served as an amusing addendum to the summer, Wessie has turned into a full blown phenomenon.

Beyond the folk song we told you about this weekend, the creature has also been honored with a beer named after it and, no doubt, these are just the start of the Wessie-themed merchandise which will emerge in the days to come.

The latest development surrounding the case is a potential new Wessie witness in the form of Westbrook public works employee Earl White, who purportedly spotted the snake on Tuesday.

While working near the Presumpscot River around 8 AM that morning, White believes that he spotted Wessie and inadvertently scared the snake into the water and across the river.

In recounting his encounter, he expressed no doubt that it was a snake and told the Boston Globe that "it's head was about as big as a rear view mirror on a small car."

Meanwhile, some experts have begun to question if the snake skin found over the weekend could have actually been an elaborate hoax.

Cryptozoologist Bill Brock told TV station WMTW that "that thing was laid out in a way that kind of suggests that someone just literally laid it there, and I'm pretty sure that's how that snakeskin got there."

As such, and since 10-foot-snakes are not native to the area, some theorize that if the skin did belong to Wessie, then it may have been someone's pet that managed to escape.

Fortunately a piece of the potential evidence has been sent to Texas to be tested, which should hopefully provide some answers as to the nature of the skin.

With new witnesses emerging and debate over evidence growing more fervent, it's safe to say that the Wessie story is far from finished.