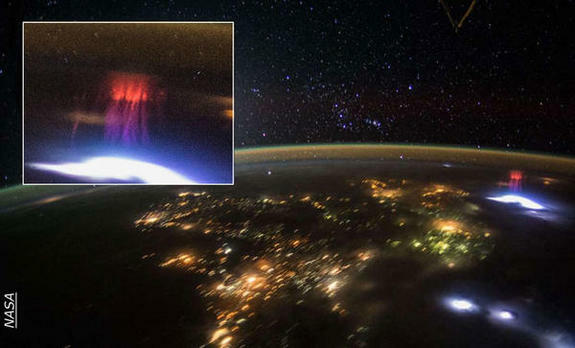 What Is It?! Astronaut Captures Mysterious Red Light

Orbiting high above Earth in the International Space Station, astronaut Scott Kelly photographed a bizarre phenomenon while soaring over Central America. On the right is a red mass hovering above a blue and white thunderstorm [close-up in inset].

Purple tendrils plume from the storm toward the baffling red flash. Upon closer examination, the scarlet flash was determined to be a giant red sprite produced by the thunderstorm. So-called red sprites (first photographed in 1989) typically appear as branching red tendrils stretching above the region of a powerful lightning flash. The electrical discharges can reach as high as 55 miles into the upper atmosphere at high altitudes.

Although common, sprites are a rarely captured from either the Earth or space because the flash lasts mere milliseconds.For further details and photos, visit Discovery.com.