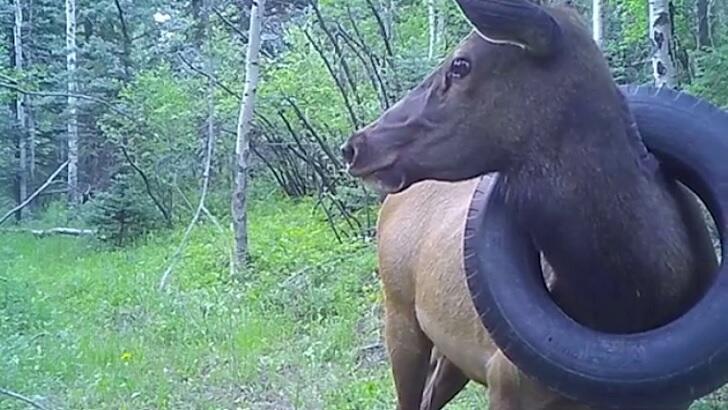 An unfortunate elk that had a tire stuck around its neck for over two years was finally freed from the onerous predicament after officials with the Colorado Parks and Wildlife department managed to track down the creature following a lengthy search. According to a press release, the animal's troubling condition first came to the attention of authorities in July of 2019 when it was spotted by a worker conducting a population survey around the state's Mount Evans. However, since the sighting was from a considerable distance away and in deep wilderness, the department was doubtful that they would be able to help the elk at the time.

In the two years that followed, the tire-clad elk was seen on multiple occasions and, this summer, the department made a concerted effort to locate the animal and put an end to its ordeal. Fortunately, following several attempts to find the creature, a pair of workers were able to get their hands on it this past Saturday. It was then that they determined that the elk was approximately four-and-a-half years old, meaning that it had been 'wearing' the tire for nearly half of its life! As one might imagine, the process of removing the object was no small feat, since the steel lining of the tire prevented them from simply cutting it. As such, the workers safely sliced off the elk's antlers and then gingerly squeezed the tire over the animal's head.

Assessing the situation after they had freed the elk, the wildlife officials noted that the creature's neck was surprisingly no worse for wear considering the circumstances. "“The hair was rubbed off a little bit, there was one small open wound maybe the size of a nickel or quarter, but other than that it looked really good,” said Scott Murdoch, who assisted in the procedure, "I was actually quite shocked to see how good it looked.” That said, in a testament to just how burdensome the tire must have been for the animal, the workers estimated that it was filled with around 10 pounds of pine needles, dirt, and other debris.