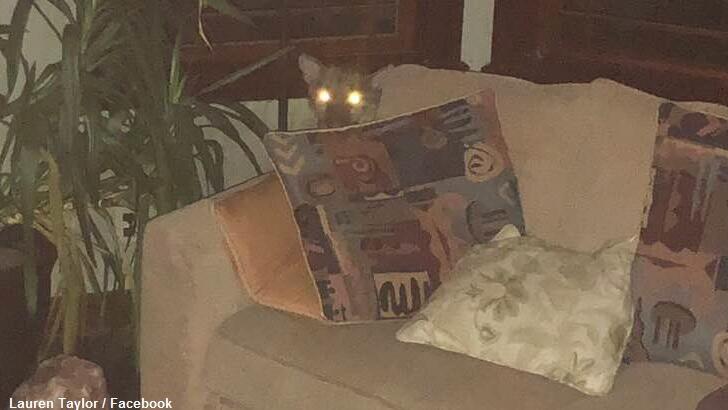 An Oregon woman who stumbled upon a mountain lion that had wandered into her living room says that she managed to coax the creature out of her home using telepathy. Lauren Taylor vividly detailed the bizarre encounter, which took place earlier this month, on her Facebook page. According to her, the strangeness began when one of her roommates spotted the out-of-place feline and screamed out in fright, which caused the cat to also become frightened and hide behind a sofa.

Rather than promptly calling animal control, Taylor opted for an unorthodox and decidedly daring approach to the harrowing situation. Upon realizing that the cougar had somehow fallen asleep behind the couch, she made some noise to wake it up and then "consciously raised my frequency, gazed lovingly into her eyes, and communicated using feline-speak eye blinking to calm her." Taylor's reasoning for this is that "cats are extremely psychic and perceptive of energy."

It seems that the tactic worked as the mountain lion was soon snoozing once again. And, incredibly, Taylor says that the cougar actually slept for an astounding six hours behind the couch since, in an incredible display of patience and courage, she and her roommate decided not to disturb the animal. However, they eventually realized that it would soon be dawn and that they needed to figure out some way of ending the odd encounter.

It was then that Taylor turned to telepathy as an answer and began envisioning "pictures of the routes out of the house via open doors" and where the creature could go in the wilderness after it escaped from her home. On the advice of "guidance" from an unnamed but presumably psychic source, Taylor and her roommate then roused the animal by way of a rhythmic drumming. The mountain lion soon woke up and walked out of the house "exactly as we had shown her."

While some may question the wisdom of how Taylor handled the incident, one cannot help but admire her conviction, especially since the cougar encounter unfolded so peacefully. It's a mystery as to whether or not her attempts to psychically communicate with the creature was what kept her safe, but it clearly didn't hurt, since she made it through the weird event unharmed and with an amazing story to tell. That said, we're guessing that wildlife experts will say that, should someone else find themselves in a similar position, they probably shouldn't try Taylor's method in their own home.