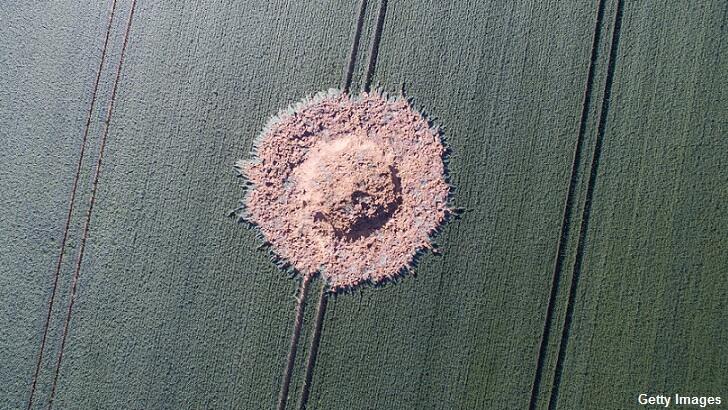 Residents of a town in Germany were shaken this weekend when a bomb from World War II suddenly exploded and left behind a massive crater in a field. The bizarre event reportedly occurred at around four in the morning on Saturday in the community of Ahlbach. Much to the consternation of those who were asleep at that hour, a massive blast shattered their slumber and a rumble resembling an earthquake swept across the area.

When authorities investigated the matter the following morning, they were amazed to find a crater measuring 33 feet in diameter and 13 feet deep had appeared in a farmer's field. Police were initially dumbfounded by the discovery, conceding that they were uncertain as to how it could have been formed. However, a subsequent examination by ordnance experts determined that the crater had "almost certainly" been the result of a World War II bomb that had been a dud decades ago.

Why the device blew up over the weekend is uncertain, but experts say that it was likely equipped with a detonator that decomposed over time and finally triggered on Saturday morning. Explosions of undetonated bombs are surprisingly not uncommon in Germany as one official noted that such events statistically occur around once a year. That said, they assured residents that the odds of someone falling victim to one of the blasts are "less than being struck by a lightning bolt."