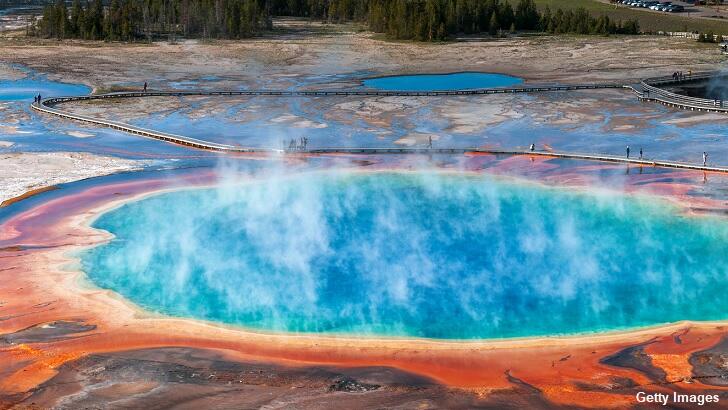 An Idaho man has been banned from visiting Yellowstone National Park for the next two years after rangers caught him cooking a chicken in the site's famed thermal springs. According to a local media report, the ill-advised culinary misadventure occurred in early August when authorities at the park were tipped off that a group of individuals had been seen headed toward the hot springs wielding cooking pots. Upon arriving to investigate the report, a park ranger discovered a rather unorthodox cookout underway.

Officials at the park say that the group had put two chickens in a burlap sack and then placed the bizarre bundle into the thermal springs to cook. As one might imagine, such behavior is frowned upon at the site and, as such, an unnamed man from Idaho Falls, Idaho as well as two of his companions received a pair of citations related to the escapade. The would-be chicken chef subsequently pleaded guilty, was issued a $1,200 fine, and is barred from visiting Yellowstone National Park for the next two years.

In the annals of bad behavior at the park, boiling a chicken is fairly benign in comparison to more outlandish events in recent years such as a tourist who was filmed taunting a bison and a treasure hunter who was charged with digging up a graveyard within the site while looking for the Fenn Treasure. And, in a case which the ranger likely mentioned to the group when he broke up the party, there was a tragic incident in 2016 wherein a young man wandered off a designated path and wound up falling into the hot springs where he was subsequently dissolved by the extreme temperature of the water.