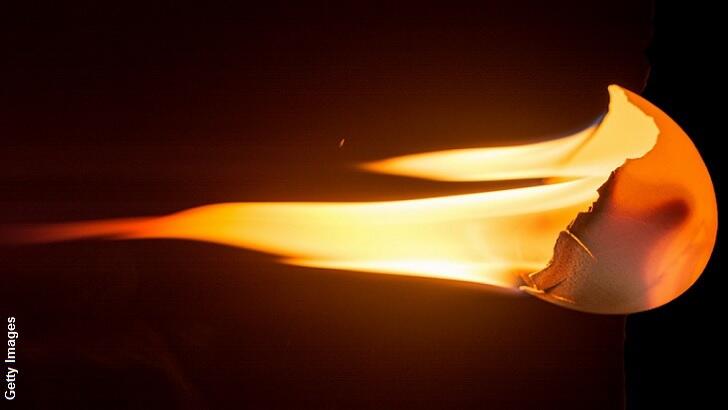 A family in Zimbabwe claim that they are being tormented by mysterious fires erupting in their home, including one recent and bizarre blaze allegedly ignited by an egg!

Philip Hlabati, who resides in the city of Gweru, says that the first incident occurred back in 2013 and that numerous other unexplained fires have started in the home over the last three years.

The most recent inferno is particularly perplexing because it is being blamed on an unexplained egg.

According to Hlabati, the family spotted the object under a bed on Thursday morning, which struck them as strange since they own neither eggs nor a chicken.

Shortly thereafter, the bed burst into flames and destroyed much of the room it occupied as well as other parts of the house.

Adding an additional layer of weirdness to the story, Hlabati told a reporter, "after the fire started some people said they had seen an egg fall from the roof accompanied by a note saying, "Hausati watanga" (You will suffer)."

A subsequent search unfortunately failed to produce either the letter or the ominous egg.

"I don't know what is happening," Hlabati lamented to the media, "this is all a mystery to us and we need assistance as a matter of urgency."

For their part, fire officials in Gweru are equally mystified by what has been happening to the Hlabati family.

"We tried linking the fire with electricity or to some other negligence but it didn't add up. It's not an electrical fault. So the cause is unknown," conceded one official, "we hear strange things happen at that house and fires mysteriously start."

Authorities may have heard of the house's history from the Hlibati's neighbor, who observed that "something is wrong. No one in the area can explain the origins of the fire. We are all baffled."

With the Hlibati's now forced to reside in the only remaining room in the house that has been unscathed by the fires, it may only be a matter of time before they flee the property due to whatever sinister source may be behind the blazes.

Until that turn of events unfolds, we suggest the Hlibati family politely decline any offers for breakfast in bed, lest they fall victim to another unexplained inferno.