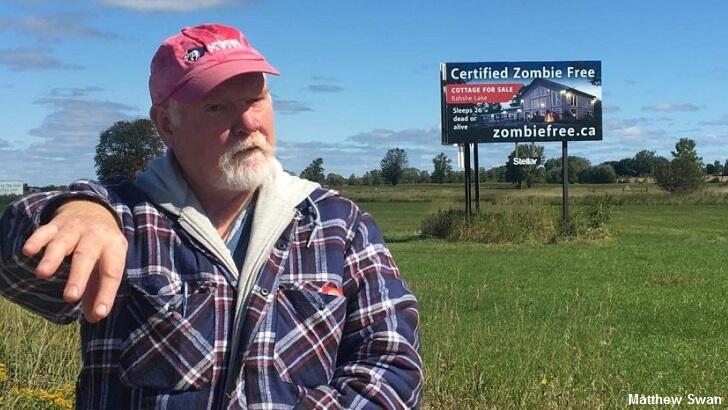 Zombie-Free Home For Sale in Canada

A Canadian man has come up with a rather clever way of garnering attention for a home he is trying to sell: by including a 30-day zombie-free guarantee with the property.

The odd assurance is the brainchild of businessman Matthew Swan, who promptly plastered the strange zombie promise on a large billboard beside a highway near the town of Brechin in Ontario.

"People are worried about many things these days," he mused to the Toronto Star, "one of the last things you want to be worried about is the fact that you buy a cottage for your family and, lo and behold, the place is infected."

Keeping the joke going, Swan says that it's up the new owner to ensure against zombies after that initial 30 day period has expired, but indicated that he's produced a manual to help them.

So far, the unorthodox selling point has failed to produce a buyer, although the fact that the rather lavish cottage sits on an island and can only be accessed by water appears to be the main reason for that.

“Zombies can't swim because they're full of holes so they walk along the water," he revealed, "it slows them down and gives you a little more time to prepare."

If you're curious for more information about the cottage, you can check it out at the website zombiefree.ca, as Swan managed to snag the pretty awesome web domain to include with the billboard ad.

Should the cottage finally get sold, perhaps Swam can team up with the Texas realtor selling a 'not haunted' house to really take the market by storm with their strange sales techniques.