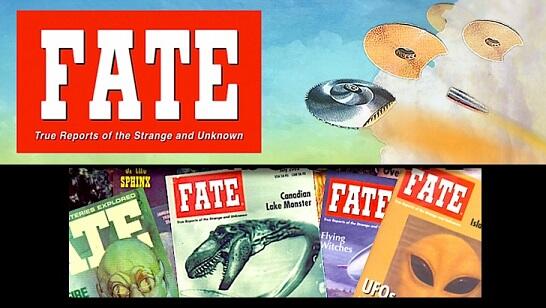 C2C is proud to partner with the legendary FATE Magazine to provide our readers with a visit to the deep paranormal past via classic pieces from the iconic chronicle of high strangeness.

This week's installment is an article titled 'Flying Saucers as Astronomers See Them' by Maurice Weekley and the legendary UFO contactee George Adamski, published by FATE in the September 1950 edition of the magazine. It is being reprinted with permission from FATE Magazine and all reproductions rights remain with them.

The rather remarkable piece provides a priceless glimpse of the burgeoning UFO field a short time after Kenneth Arnold made 'flying saucers' part of the national conversation and many years before Adamski went on to become both famous and infamous for his claims of ET contact.

And now, journey back into the FATE Magazine archives to learn about one of the first of many 'UFO photographs' taken by Adamski and the furor it caused in the 'flying saucer' scene back in 1950: 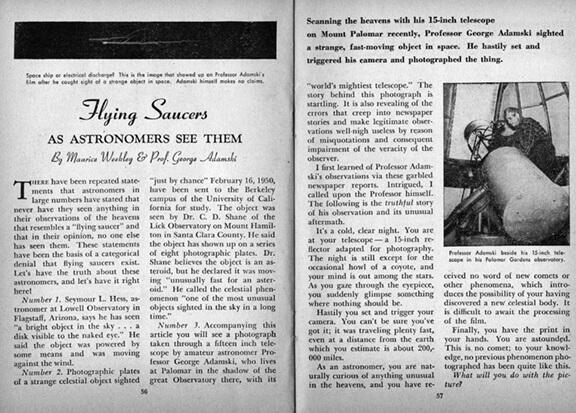 There have been repeated statements that astronomers in large numbers have stated that never have they seen anything in their observations of the heavens that resembles a "flying saucer" that in their opinion, no one else has seen them.

These statements have been the basis of a categorical denial that flying saucers exist. Let's have the truth about these astronomers, and let's have it right here!

Number 1. Seymour L. Hess, astronomer at Lowell Observatory in Flagstaff, Arizona, says he has seen "a bright object in the sky … a disk visible to the naked eye." He said the object was powered by some means and was moving against the wind.

Number 2. Photographic plates of a strange celestial object sighted "just by chance" February 16, 1950, have been sent to the Berkeley campus of the University of California for study. The object was seen by Dr. C.D. Shane of the Lick Observatory on Mount Hamilton in Santa Clara County. He said the object has shown up on a series of eight photographic plates.

Dr. Shane believes the object is an asteroid, but he declared it was moving "unusually fast for an asteroid." He called the celestial phenomenon "one of the most unusual objects sighted in the sky in a long time."

Number 3. Accompanying this article you will see a photograph taken through a fifteenth inch telescope by amateur astronomer Professor George Adamski, who lives at Palomar in the shadow of the great Observatory there, with its "world’s mightiest telescope." The story behind this photograph is startling. It is also revealing of the errors that creep into newspaper stories and make legitimate observations well-nigh useless by reason of misquotations and consequent impairments of the veracity of the observer.

I first learned of Professor Adamski’s observations via these garbled newspaper reports. Intrigued, I called upon the Professor himself. The following is the truthful story of his observation and its unusual aftermath.

It’s a cold, clear night. You are at your telescope-a 15-inch reflector adapted for photography. The night is still except for the occasional howl of a coyote, and your mind is out among the stars. As you gaze through the eyepiece, you suddenly glimpse something where nothing should be.

Hastily you set and trigger your camera. You can’t be sure you’ve got it; it was traveling plenty fast, even at a distance from the earth which you estimate is about 200,000 miles.

As an astronomer, you are naturally curious of anything unusual in the heavens, and you have received no word of new comets or other phenomena, which introduces the possibility of your having discovered a new celestial body. It is difficult to await the processing of the film.

Finally, you have the print in your hands. You are astounded. This is no comet; to your knowledge, no previous phenomenon photographed has been quite like this.

What will you do with the picture?

Many months passed before Professor Adamski found what seemed to be the right agency to analyze his picture. J.P. Maxfield, superintending scientist at the U.S. Navy Electronics Laboratory on Point Loma, near San Diego, in conversing with the astronomer, mentioned that he would like to receive copies of any picture Adamski might get during his observations which might be classed as unusual-especially if it might have any bearing on the flying saucer mystery.

Some time later an official Navy car pulled into the driveway at Palomar Gardens, the friendly inn owned and operated by the astronomer. The driver, a young officer who was just returning from the top of Palomar on Navy business, entered the inn and was greeted by Adamski, who recognized him as Maxfield’s chauffeur on previous visits.

During their conversation, Adamski remembered his photograph. When the visitor was ready to leave he was given a print to take to the laboratory, where it was to be given to Maxfield.

In the course of one of his numerous lectures, which the professor gives before all sorts of luncheon groups and clubs, Adamski chanced to mention the print in connection with statements he had made concerning the flying saucer mystery.

Either a newsman was present, or the statement was otherwise conveyed to the press, for Adamski was (mis)quoted in a San Diego paper, as having stated that the object he had photographed was a spaceship from another planet.

Actually, he had only mentioned this as a possibility, since he couldn’t possibly be sure of what it was, and for that reason had been cooperative in submitting it to the Navy Electronics Lab. However, when the article was printed the Laboratory, through one of its spokesmen, stated that such a print had never been received.

This was soon disproved by a letter that Professor Adamski received a few days later which bore the heading of the Navy Electronics Lab at Point Loma. 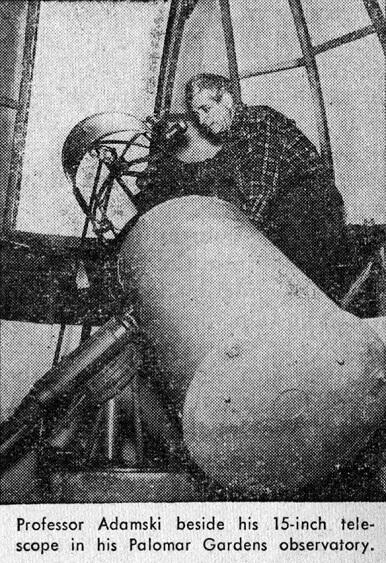 We read it pretty thoroughly-two or three times-and though we remember it expressed gratitude for having received the prints (Adamski said he must have sent two instead of the one he intended) and apologized for the delay in acknowledgement, there is one paragraph that remains firmly fixed in our minds:

"These pictures look very much like a type of electric discharge which frequently occurs in cameras during film pulling in dry or cold climates. We sincerely doubt whether they have any connection with visitors."

Just how incongruous is that word "visitors" as applied to a thing as great and earth-shaking as a possibility of OTHER WORLDS sending ships within our range of detection?

Professor Adamski’s photograph, in sum, may mean much or little. The casual manner with which the Navy dismisses it is intriguing, however, and follows the official "line" consistently taken by the government toward unidentified sky phenomena.