Author and ufologist, David Sereda discussed recent UFO cases as well as the search for alternative energy sources. He detailed how his work to help promote such technologies as fusion with helium 3, was thwarted by various companies such as Southern California Edison, even though helium 3 offered a superior power source.

Sereda commented that recent UFO sightings in such places as Mexico, Venice, CA and Sonora may indicate a stepped up pace by the craft's occupants. The Mexico sighting was similar to the NASA UFO footage he has studied, in that the craft are only picked up on tape but not seen by the naked eye. The Venice sighting, he said suggested a "strobing wave" zero mass spaceship in which its frequency of mass resembles that of photons, which turns it into a "light ship."

During the last hour, a caller claimed to be guarding an ET craft at "Hangar 18." He described the craft as a 380 ft. long rounded triangle, which crashed in 1958 and contained 17 dead bodies.

First-hour guest, Bob White shared details about a UFO artifact (pictured below) he said he retrieved in 1985. While driving with a companion to Las Vegas, they encountered a bright yellow-orange light on a Colorado highway. The light rose in the sky and seemed to merge with a craft with two blue tubular lights and then ejected a small object that appeared to be on fire, he said. 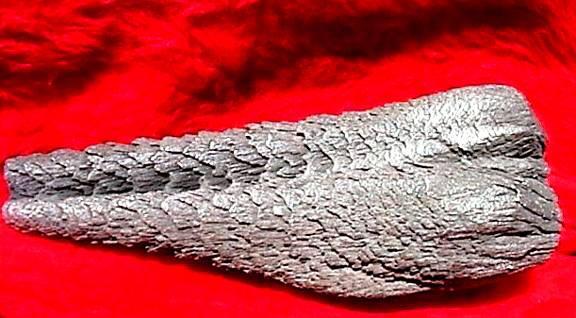 White eventually took the artifact to various places to be examined, including Los Alamos Laboratory, where he said one scientist told him in a private phone conversation that the object was "definitely extraterrestrial," only to deny it later. White, who said he has passed two polygraph tests regarding his testimony, noted that the artifact was found to be made of aluminum and 32 rare earth elements.