Reporter and editor for Earthfiles.com, Linda Moulton Howe, presented an interview with former Canadian Minister of Defense, Paul Hellyer, about his discussion with a retired USAF general who confirmed, "UFOs are as real as the airplanes flying overhead," as well as a report on a UFO crash and burial in the Utah desert in the early 1950s.

Linda provided the below image to accompany her presentation. Taken on June 11, 1953, the aerial photograph shows a mysterious triangular shape in a Utah lake bed near Garrison (Coordinates: 38.37.47.13 N, 113.40.36.72 W), measuring 4,400 ft long by 2,700 ft wide. According to Linda's research, a UFO may have crashed and been buried at this site because it was too big to be hauled off. 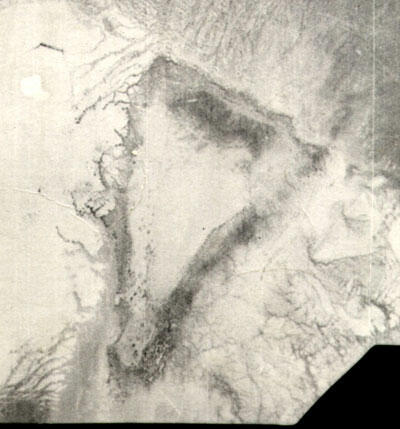 During the first hour, Mike St. Lawrence of the UFO Abduction Insurance Company presented a tongue-in-cheek description of his company's unique insurance coverage. According to St. Lawrence, the policy provides for one's beneficiary the sum of $10,000,000 only if the abductee can show proof that he was taken aboard a UFO and gets the signature of "an authorized onboard alien."

St. Lawrence said his 'company' has been in business for 18 years and is approaching 30,000 policy holders. Larry Spatts, one of two policyholders whose claims have been approved, also appeared during the show. So as not to burden a person with all the money upfront, St. Lawrence explained that Spatt's beneficiary will receive one dollar each year for the next 10 million years.

Additional terms of the policy include 'Sarcasm Coverage,' which is limited to one's immediate family (and then only while at home), and 'Double Indemnity Coverage' in the event an alien insists on conjugal visits or refers to the abductee as a food source. View George Noory's UFO Abduction Insurance Policy to find out who will receive $10 million in the event George is taken from (and returned to) Earth.