Part of DARPA’s Project Pegasus as a young child, and now a practicing attorney, Andrew D. Basiago seeks to end the U.S. government's time travel cover-up. He claims to be one of America's early time-space explorers, and revealed his experiences with time travel research and development. As one of 140 American children involved with experiments with teleportation, during the late 1960s, he said the government was interested in developing a technology to transport the President and his family in urgent situations, and wanted to test the mental and physical effects. The teleporter consisted of "two parentheses-shaped objects about 8 ft. tall," around 10 ft. apart from each other, and inside the interior of the armatures were "tiny little ports that were generating a blue-green light." Between the armatures was a tuned-in field of radiant energy that the subjects leaped through, he detailed.

Via a device called a chronovisor, which generates a hologram, Basiago claimed he was sent back to around 1 million BC, a hot red-earth environment, where huge dinosaurs roamed. Later, he was teleported to the year 2045, to pick up intelligence data on the years between the 1970s and the 2040s, he said. Interestingly, the year 2045 was a time of peace and environmental stability, he noted. He referred to another type of technology to time travel to the past called Plasma Confinement, which allowed him to visit Gettysburg in 1863 to see Lincoln's speech (see article below).

We need to adopt teleportation in the 21st century "as our principle means of long distance transport, simply to survive as a planetary civilization," he commented. Basiago will be presenting a lecture in Port Townsend, WA on November 20th. More of his intriguing story is recapped in his C2C appearance from last year.

First hour guest, Dannion Brinkley made his annual Veteran's Day appearance to talk about his work with the Twilight Brigade, an organization that supports sick and dying veterans. An advocate for complementary and integrative medicine, Brinkley said homelessness and diabetes have increasingly been a problem for vets.

Andrew D. Basiago provided us with the following caption for this photo: 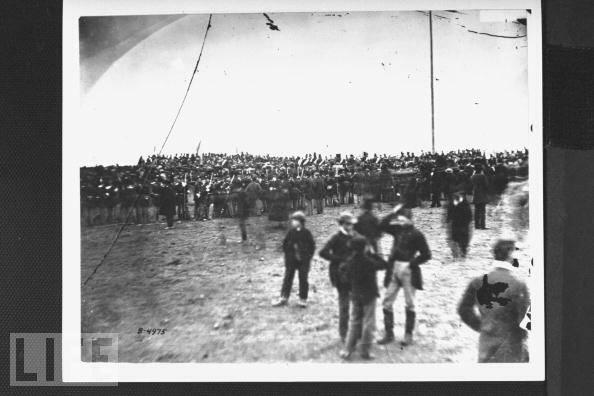 "Andrew D. Basiago, 10, at Gettysburg, PA, on November 19, 1863, after being sent there from 1972 by DARPA's Project Pegasus via a "plasma confinement chamber" in East Hanover, NJ. Andy is the boy standing to the left in the foreground of the image. He is wearing the large shoes that were given to him by Gettysburg cobbler John Burns after he walked into Gettysburg barefoot and shivering in the brisk autumn air after arriving from the future. Andy says that this image was taken shortly after President Lincoln arrived on the dais to deliver the Gettysburg Address."