Dr. John Mack, an eminent Harvard psychiatrist, and Pulitzer Prize-winning biographer risked his career to investigate the phenomenon of human encounters with aliens and give credibility to the people who were convinced they had happened. In the first half, New York Times journalist Ralph Blumenthal shared his research into the late John Mack and his brave exploration of alien abduction. Mack was a genuine expert in human psychology, so if anyone could debunk the abductees' claims, it would have been him, Blumenthal noted. Among the items that Mack found so compelling about the reports of alien contact, were:

While Mack worked with other prominent alien abduction researchers such as Budd Hopkins and David Jacobs, he eventually came to believe there was a spiritual or interdimensional aspect to alien contact, whereas Hopkins and Jacobs thought it occurred in the physical plane. Blumenthal recounted Harvard's disciplinary proceedings against Mack, a kind of "inquisition," where they demanded evidence or proof of his alien claims. Eventually, Mack brought on tough legal representation to defend him, including Daniel Sheehan. It was a clash of world views, Blumenthal said, but in the end, Harvard backed down and Mack was not censured. At the time of his death (hit by a drunk driver in London in 2004), he was immersed in research on the afterlife.

In the latter half, paranormal researcher Trey Hudson discussed his in-depth research into a location that rivals Skinwalker Ranch for high strangeness. Known simply as the "Meadow," it's a nexus for many astounding events with reports of UFOs, cryptids, portals, crop circle-like formations, orbs, and other oddities. In order to preserve the security of the site, Hudson wouldn't reveal specifics of the location other than to say it was in the American South. His investigative team has made a number of visits to the Meadow, and some of the unusual incidents there he correlated to Native American lore involving strange entities. Much of their best video evidence was captured on FLIR (thermal imaging), he added.

On one trip to the Meadow, there were three teams at different vantages. Bob, one of the team members, reported he had no memory of how he arrived at his location in the woods, though he hadn't had any physical problems. Bob was picked up on FLIR, Hudson recalled, and to the astonishment of the people tracking him, his image transformed into an orb or sphere which moved at an extremely rapid pace (around 25mph) across the area, which would have been impossible for a human. In a later February 2017 investigation at the Meadow, strange "boxes" or cubes formed on the FLIR units, and then team members disappeared off the FLIR view before returning. Two heat signatures were also detected watching the group, he added. Subsequently, a strange woman dressed in business attire showed up at their remote forest campsite, asking to see Hudson. The woman behaved very oddly, and he compared the visit to a Men in Black encounter. 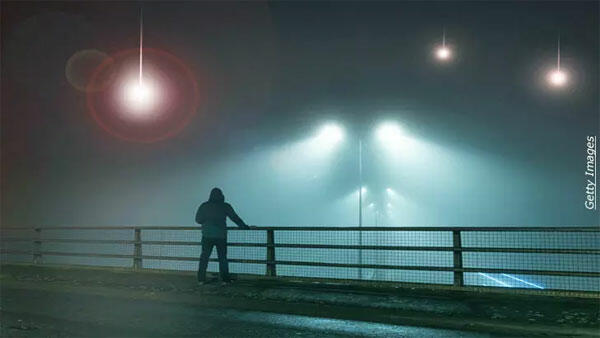 George Knapp shares items of recent interest including an article about how the Brazilian Air Force has been open about their UFO investigations: