Scott Wolter, author, host of America Unearthed, and President of American Petrographic Services since 1990, joined guest host Jimmy Church (Twitter) to report on a discovery of ancient stones discovered in a cave in Texas (Related Images). According to Wolter, the man who found the stones had been fishing in a nearby creek and noticed carvings on a cliff face. He went back to the area later with a friend and dug out a tablet they could see sticking out of the ground. The two continued digging and eventually found the cave filled with dozens of other carved tablets.

The cave itself has a carving of a ship and the numbers 1-5-0-1 above the entrance, Wolter revealed. This could mean the person or people who put the stones in the cave arrived by boat in the year 1501. "The weathering that I'm seeing is consistent with that 1501 date," Wolter said. The inscribed stone slabs, most the size of dinner plates, were stacked like books in a library and stuck together with a blue powdery substance, he continued. The carvings on the tablets appear to be legitimate and represent several different themes and cultures, Wolter added.

One of the stones is engraved with what appears to be an archangel character standing atop a skull next to Hebrew characters (see below). Wolter consulted a Hebrew expert who suggested the language on the stone is Spanish or Portuguese but written with Hebrew characters that are from between the 6th and 10th centuries. Another tablet displays what looks like an eye with radiating columns filled with a series of dashes and Egyptian hieroglyphics. Wolter pointed out the tablet's similarity to the Pontotoc Stone and admitted he needs help deciphering it. One of the stones found in the cave features inscriptions that are identical to the Poteau Runestone, he noted. "Somebody who carved these stones was educated enough, possibly, in the ancient mystery schools and they learned how to use various texts like runes, like Hebrew, like Ogham," Wolter said. 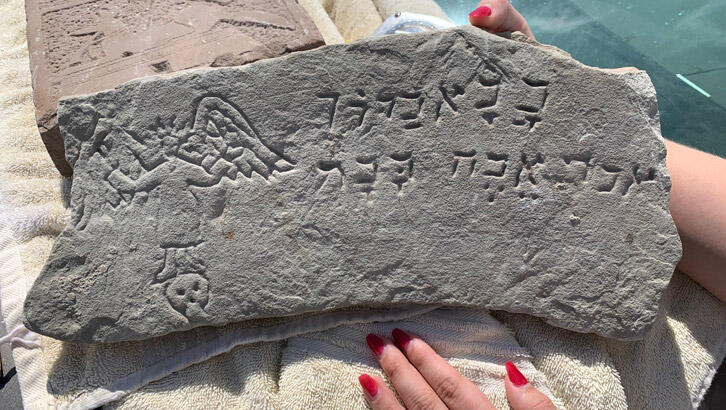 The final hour of the program featured Open Lines.