Expert on all things in the Mojave Desert, author M.L. Behrman joined guest host Ian Punnett (Twitter) to report on strange happenings in the desert, including mysterious footprints found in the sand which do not appear to be human (related images). "I had always thought that the desert was strictly the background for a Western... but then I started seeing and hearing how weird it was and how many people had a story," Behrman said, noting many of the tales go back 400 years. He recalled the time a prospector toured him around the Mojave and claimed to have tracked a Bigfoot through Death Valley. Native American tribes in the region have stories about a "hairy brother" in the desert, Behrman added.

"Conceivably, a creature... could be living in the wilder, upland, cooler areas and only crossing the desert floor when its going places," he continued. Rodents are plentiful in the desert and there are deer and sheep in the mountains for food, Behrman explained. He recounted a recent trip to investigate a report of orbs in a canyon when he happened upon a set of strange tracks. The tracks were fresh, made with bare feet, and were deep in the sand, Behrman noted, estimating the size around a men's 11. A couple of days later he returned to the same area to find a second much larger set of tracks. They were 16 inches long with a stride of four and a half feet, he recalled. Behrman estimated the weight of whatever made them at 350 pounds with a height of at least seven feet. "If that's a human, I don't want to meet that guy either," he confessed. 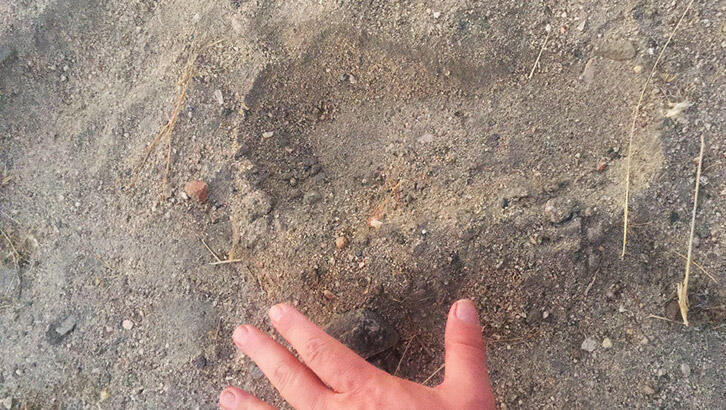 M.L. Behrman has provided several images of the mysterious footprints he found in the desert. View here.

Open Lines followed in the second half of the program. Howard in Vancouver, Washington, told Ian about a region near Mount Adams where there is a small volcanic peak with a lake at its base. "From time to time hunters and campers come back from there and mention that they have seen an apparition on the side of that lake," he revealed. The description that has been reported many times is a Native American female combing her hair, Howard added.

Jim from Placerville, California, reported seeing a shooting star two weeks ago that inexplicably ceased moving across the sky. "It just shot across the sky and then just stopped," he said. Jim watched the object for ten minutes until it shot back the way it came.

Truck driving through Tennessee, Georgine described an incident two weeks ago when she heard a loud vibration-type sound, like a helicopter, and became instantly disoriented. The next night near the same area she saw flying craft which made no sound at all. "I noticed in the sky, really, really, low, were two rows of red lights... about the size of a football field apart," she recalled.