Jonathan Emord is the only attorney that has defeated the Food and Drug Administration (FDA) seven times in Federal court. In the first half, he discussed the state of individual rights in light of orders, mandates, and restrictions placed on citizens and businesses. Companies manufacturing vaccines (such as the new ones for COVID) may be less concerned about adverse effects because they're protected from liability through US law, he pointed out. Legally, airlines could restrict passengers from flying on their planes if they aren't vaccinated, but "they risk severe public reaction to such a move," he commented. Rather than mandated COVID vaccinations, Emord believes that as sovereign citizens, we should determine for ourselves whether to take these injections, and be fully protected in whatever decision we make.

He was critical of what he considers the overreach of state governors, with their edicts and decrees shutting down various businesses, and mandating curfews because of COVID concerns. Regarding the closure of restaurants, "the government," he said, "is depriving people of both their liberty and their property rights without due process," as they haven't proven that specific establishments are a causative factor in the spread of the virus. With the imposed lockdowns, and other issues, we're experiencing a real threat to our individual liberties in America, he maintained. Further, he argued we should eliminate the administrative state and only make laws through congressional action. Emord announced the publication of his forthcoming book, The Authoritarians, coming in early 2021.

David Sereda has studied meditation, world religions, ancient history, and alternative zero-point energies for over 40 years. In the latter half, he addressed anomalies surrounding the disintegration of the Space Shuttle Columbia in 2003, and their relation to a possible ET war. The American public was led to believe a mega-lightning burst struck the Columbia while it was entering Earth's mesophere at 17,500 mph. But in examining five consecutive photos of the incident taken by a tourist (see below), Sereda concluded that it couldn't have been a lightning strike or sprite, because such fleeting phenomena would only be captured in one of the images.

Claiming a NASA cover-up, he estimated that what hit the Shuttle was moving 23,000 mph faster than any missile on Earth. It course-corrected at 90 degrees and then reached 60,000 mph before striking Columbia and blowing it apart, he continued. Sereda considers this to be an attack by a UFO weapon, and traced the lineage of an ET/UFO war back to the 1942 Battle of Los Angeles and the Roswell Incident in 1947 (in which he suggests that the US military shot down an ET craft). He also linked the 2003 Columbia disaster to the Navy's Nimitz UFO incident of 2004, and revealed information that microwave cameras had picked up interdimensional ET craft. This ties in with Sereda's previous research about UFOs appearing in ultraviolet wavelengths. 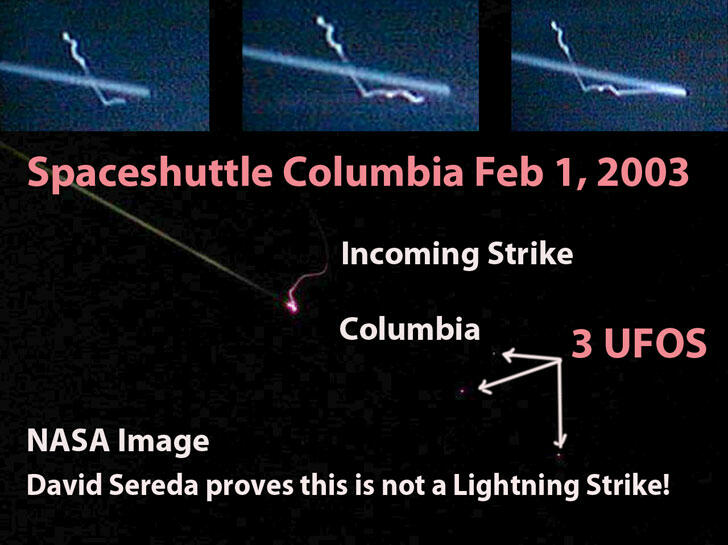 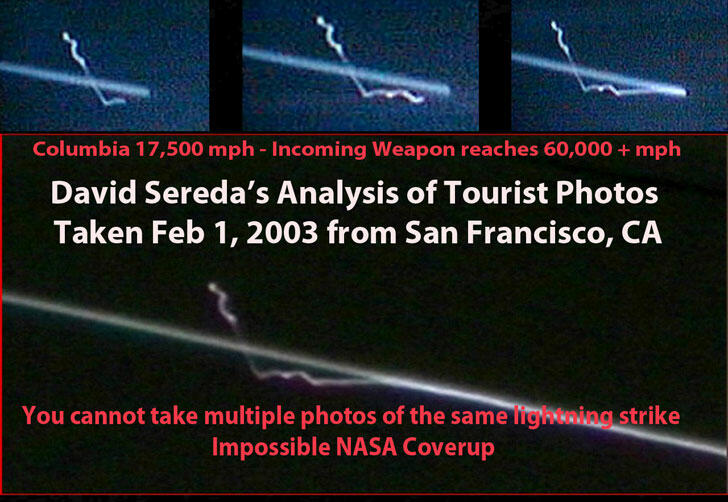