In 1994, James McClenon, a sociology professor and licensed clinical social worker, wrote the groundbreaking book, Wondrous Events, which chronicles stories of the paranormal and supernatural. He joined George Knapp for a conversation about how anomalous occurrences are likely the foundation of religious or spiritual belief systems. Certain people have a propensity for these kind of experiences, and they happen across the world in every culture, McClenon explained. The experience itself appears to be the source of the belief, he added, noting "if you've seen it, then you know that it's real."

McClenon shared survey results from his study which show Americans have a higher probability of unusual experiences than Europeans or the Japanese. He did not find a strong relationship between religiosity and anomalous experiences. "Many experiences don't seem to fit with a person's previous religious belief," McClenon reported.

He shared details from a 1979 haunting case involving a family in Baltimore. McClenon stayed in the room in the house that was said to be the source of much activity and did experience unusual phenomena. "In the middle of the night I saw a bright light on the wall," he recalled, noting it was followed by a loud knocking sound next to his head. Later that same night, the bed upon which he rested began to shake. In general these kind of experiences are not harmful but fear can make them more difficult, he revealed.

During the second half of the program, retired US Border Patrol agent Rocky Elmore discussed the bizarre and ghostly tales of fellow US Border Patrol agents. Elmore himself claims to have had his own eerie encounter with a recently fallen agent, who began to appear on top of the cliff from which he died. "The whole job is almost paranormal itself, it's so unusual," he said. According to Elmore, agents typically do not share their strange on-the-job experiences in a group for fear of what others may think and how it may impact career advancement.

Elmore recounted a remarkable experience he had one night when his group of trainees entered a secure area where a sensor had gone off. The group heard a single large splash in a stream near their location, he recalled. "It sounded like something quite heavy had fallen from the sky and landed in the creek," Elmore continued, noting there were no follow-up splashes. The training officer pulled his weapon, and there was a feeling of foreboding in the air, he added.

The group never saw anything and Elmore did not learn the rest of the story until more than a year later when he was informed about an agent who saw a massive bipedal creature following two agents on his thermal imaging scope. If it was Bigfoot, it was not visible to the naked eye, Elmore noted. "It's some kind of interdimensional being... there's something about it that is supernatural or paranormal," he suggested. 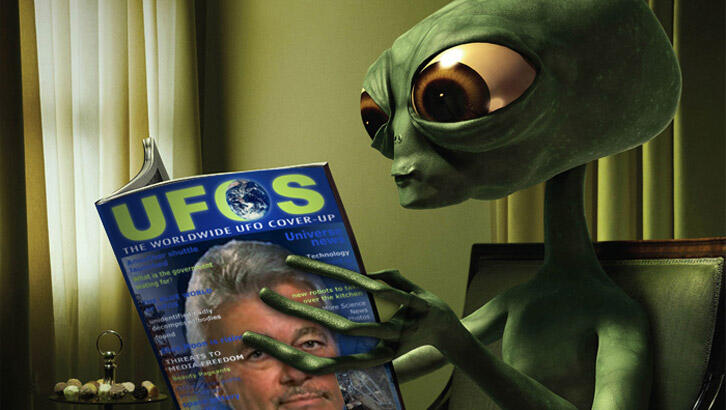 George Knapp shares a number of recent news items of interest, including an article about the space race to Mars, a report on a woman who claims to have met a group of beings in heaven, and George's own investigation into the U.S. military's teleportation research: