In the first half, 'Ghost whisperer' Mary Ann Winkowski spoke about earthbound spirits, curses, and knowledge she's gained from those on the Other Side. She revealed that shadow people or dark apparitions aren't necessarily negative entities; they can be relatives visiting even after they've gone to the light, rather than earthbound spirits that are more likely to stir up trouble. Should you take a photograph that has an orb in it, "if there's a design in the middle, that is a spirit or a guardian angel-- somebody from the light that is visiting," and if you enlarge it, you'll see the face of who it is, she continued. The dream state is one way for people to communicate directly with departed loved ones, "but unfortunately, they still don't know the lottery numbers," she quipped.

Vintage items that you purchase from garage sales and thrift stores could come with a little more than you bargained for-- ghostly attachments, she cautioned. One way to reduce the chance of a ghost following you home is to sprinkle a little sea salt on these objects after being placed in the trunk of your car, she advised. When curses and negative energy are directed to an individual, it is typically by the living, though sometimes, in the case of family curses, they can travel from generation to generation, she said. Winkowski also talked about pets' sensitivity to the paranormal. When pets appear to be looking at something invisible to you, if it's at eye level, it's probably an earthbound spirit, but if their attention is directed toward the ceiling, that's someone from the light that is visiting, she detailed.

In the latter half, we presented our annual Halloween night Ghost-to-Ghost show, featuring callers' ghost stories. Crystal from Houston shared an unnerving tale of working alone at an office late at night during the early 2000s. She noticed chairs that seemed to move on their own. At one point, she experienced what "felt like a cold piece of ice move down her spine," and then she suddenly heard old saloon-type music. But when she checked her iPod, it was turned off. Liz in San Jose recounted a bizarre encounter from the early 1970s in the Finger Lakes region of New York. She was driving at night when a misty fog appeared out of nowhere, and then a big white horse ran out in front of the car, but she realized that the horse had no legs.

Karen in Riverside, CA recalled an incident when "a ghost saved her life." At the time, she lived in a wooden house that was built in the 1920s. She had turned on the wall heater, and a few minutes later, she heard three loud, inexplicable thumps coming through the wall that repeated twice. This led her to investigate the premises, and she found that a garden hose had been placed on the heater vent and was just starting to catch fire. Derek from Idaho shared an eerie story from his childhood. In 1973, in Lewistown, MT, he and a friend rode their bikes to a neighborhood cemetery one night. They walked around a sealed mausoleum, and he pushed a wire into a small opening in the structure, which went in freely for about a foot. "All of a sudden, it felt like something was pulling on the wire," and it continued to be pulled into the mausoleum until it disappeared. 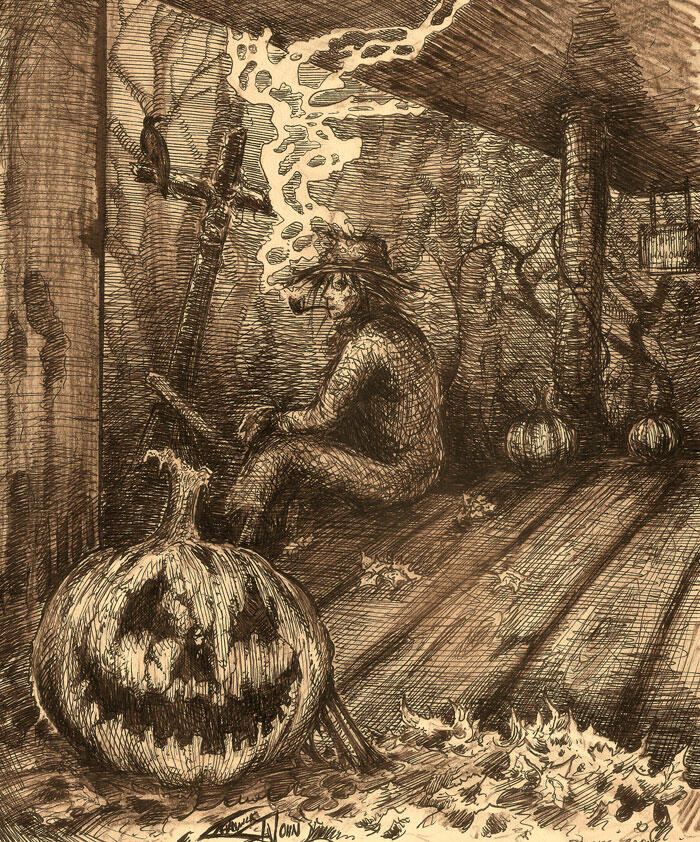 Check out all the spooky artwork from this year's gallery. Pictured above is "Smoke Break" by Chadwick St. John.