Researcher Joshua P. Warren returned to discuss evidence of paranormal phenomena, both in the lab and in the field, as well as in the Bermuda Triangle. There is a connection between electricity and unusual phenomena, he believes. Since the electrical charge can be contained in a vacuum, certain locations, at certain times might glean more electricity from this vacuum and release visible energy, he explained.

Ghosts are most often seen in low humidity conditions, he said, and may be manipulating electrostatic charges in the environment in order to manifest. Yet the more he studies the phenomenon, he has come to conclude that the vast majority of ghosts are not intelligently interacting, but rather "redundant imprints" from the past. As such, their existence "borders on time travel," he suggested.

In one of his investigations, in the attic of a haunted home, he described witnessing a "blue-gray mist" that was 2-ft. in diameter and contained an angular geometric pattern. The apparition had an icy feeling when he touched it, and gave off an electrostatic charge such as you might feel in front of a TV set, he noted. He also discussed his expedition to the Bermuda Triangle last Halloween, wherein their ship was followed by a white sphere of light for one hour. In terms of the missing ships and planes reported in that area, he posited that there could be a gravitational anomaly capable of warping space and time.

Joshua sent us a photo of something that he created in the lab-- a flying-saucer-shaped plasma, hovering between two electrodes. 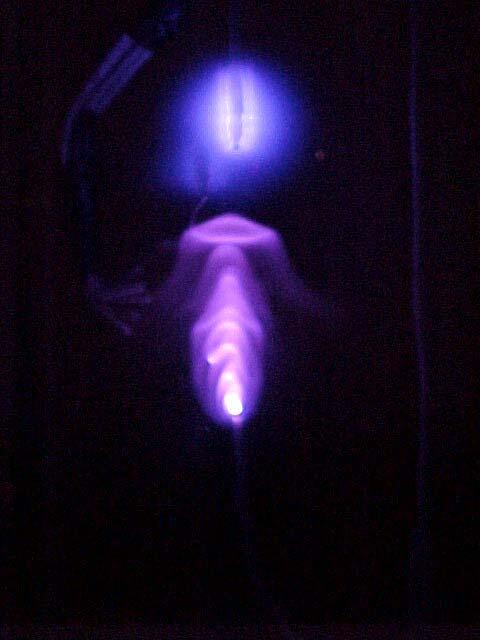 Author Max Hawthorne discussed his research into real life sea monsters, including a report of an enormous sea turtle the size of a bus. Followed in the second half of the program by cryptozoologist D.A. Roberts who reported on his research into the Dogman.
More »
Tuesday - Collapse of the Dollar / Contact with the Spirit RealmJames Rickards | Lorna Byrne
Wednesday - Alien Abduction / Lost & Found in SpaceL. A. Marzulli | Bill Mumy
Thursday - Dangers of GMOs / 2023 Paranormal ForecastJeffrey Smith | Susanne Wilson
Friday - Death Rituals Worldwide / Open LinesMandy Benoualid | Jeremy Cohen
Full Schedule »