Paranormal researcher Nick Reiter shared case studies and theories regarding mysterious phenomena such as ghosts and entities. The unifying theme to such experiences appears to be human consciousness, and the phenomena can't be entirely separated from the living person's perceptions, he stated. He also believes there is "crossover" between ghosts and aliens, as both share the "trickster" element-- i.e. some type of intelligence cloaking itself.

Among the cases he discussed, was a haunted farmhouse in Ohio that was the site of a double child homicide in 1905. An EVP they recorded there had the sound of knives being swiped against each other, he reported. Reiter noted that it's possible "geopathic factors" might preexist in a space and influence a person to commit violent acts.

He presented details about The Penny Ghost case, which he studied in 2003. In a type of "apport," corroded pennies would fall out of thin air. Upon examination, Reiter found that the dates of the coins were mostly from the 1960s and 70s, but were not otherwise unusual. He also recounted The Spectre of Stone St., a case in his hometown of Gibsonburg, Ohio, where a tall white translucent robed figure was seen. 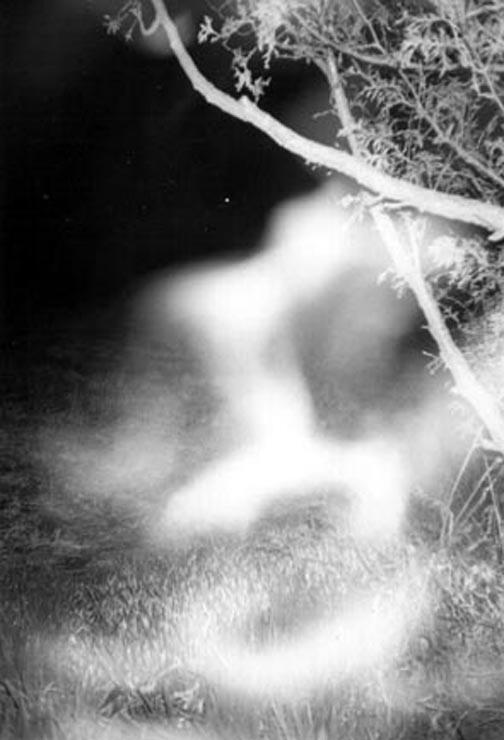 Nick sent us this image from the Avalon archives, which was taken by Lori Schillig during an investigation into claimed poltergeist activity at a location in northern Michigan, in 1997. "This photo," he writes, "was the centerpiece of one of our earlier published papers on how images invisible to the eye may be sometimes captured on film. It also corresponded eerily with a local folklore anecdote of a spot along the little county road nearby where multiple witnesses had seen ghostly images of a man and woman. Of course when this shot was taken randomly, LS did not see anything unusual, nor were the weather conditions producing any visible fog at the time."

First hour guest, Oliver Williams, editor of a website on 'time traveler' John Titor reacted to the audio interview of Larry Haber, the attorney for the Titor family. In the pre-taped segment, Haber fielded questions to Kay, the alleged time traveler's mother, and then relayed her answers.

Among her revelations: The current John Titor is eight years old; he did meet the time-traveling Titor (his older self) who stayed with the family for three years. Kay said she was terrified by the situation but recognized the older Titor as her son because "how can a mother not know her own son." Williams found that the interview raised more questions in his mind. One possible conflict he noted was that in an online posting Titor said he was not using his real name.