In the first half, remote viewing teacher Edward A. Dames discussed the current cases his agency (Matrix Intelligence Agency) is working on, including updates on the solar kill shot, his work on the Sasquatch/UFO connection, mutations of COVID-19, and the status of Kim Jung Un in North Korea. He also shared results of a recent remote viewing (see graphics below) of a mysterious radioactive plume. They traced the location to a new nuclear reactor (still under construction) in Sosnovy Bor in Russia on the Gulf of Finland. About a week ago, Dames said he remote viewed the location of Kim Jong Un, and found him in a hospital, where he seemed to have weak vital signs-- indicating that he was either dead or sleeping.

As he mentioned in his March appearance on the show, he concluded that the coronavirus accidentally escaped from a laboratory in Wuhan that was investigating biowarfare agents. Dames said he consulted on a potential antibody-related treatment for the virus, which involves a convalescent plasma. He warned that the pandemic's consequences could be amplified by the fall with cities cordoned off and supply chains collapsing. Worse still, he continued, is the solar kill shot that he's predicted for years. He currently estimates that it will arrive during Solar Cycle 25, just getting underway. Speaking of his 'Project Starman' research, he described how Bigfoot creatures are beamed into our reality from a "capacitor bank" that seems to emanate from a very cold world-- possibly Earth in the future, or an entirely different planet.

Longtime morning drive radio host in Cleveland, Ohio, Trapper Jack has for over 18 years compiled stories of amazing synchronicities and coincidences which defy logic and statistics. In the latter half, he shared such stories, as well as accounts of angelic interventions, healings, and miracles. He related several people's powerful near-death experiences, such as that of a woman who was invited to stay in Heaven but was shown that if she did remain there, her son would end up committing suicide, and her boyfriend would be destined for Hell. To help turn their lives around, she opted to stay in the physical world, he recounted.

Relating various angelic experiences, he shared how a New York City fireman, Danny Sheridan, told him about numerous instances where firefighters were saved under miraculous circumstances. In one example, a fireman working to put out a blaze at an abandoned warehouse fell through the ceiling and landed on a bed around 30 ft. below and was uninjured. A man named Jeff said he was rescued from drowning by a disembodied hand that seemed to push him toward the beach, Trapper added, and in another case, an angel directed a man to his computer to find a message from his deceased brother. For more such stories, check out Trapper Jack's podcast, Touched by Heaven.

In tandem with his appearance, Ed Dames shares two graphics. He writes that the mysterious airborne radionuclides (pictured above) came from the center stack in the Google Earth overhead (below). His Matrix Intelligence Agency tracked down the source of the original COVID-19 microbe using similar techniques, he adds. 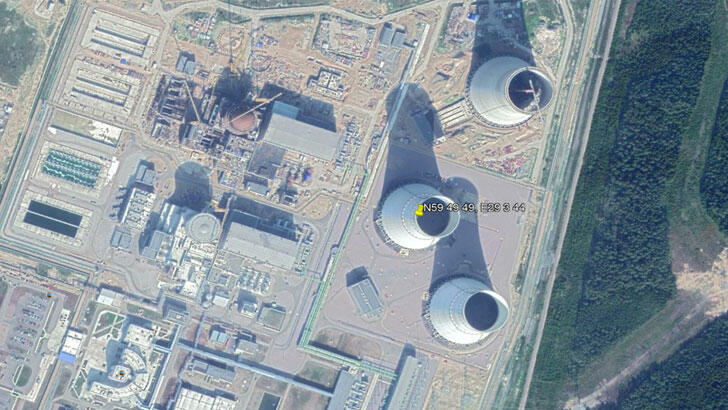