In the first half, founding investigator of the Mars Research Group, The Cydonia Institute, George Haas, discussed geoglyphic formations on Mars, including the Raptor Zone Complex in the Elysium region. The Zone features an eagle head geoglyph, and a set of geometrically shaped structures that he believes directly correlate with the pyramids of both North and South America (view related images). Rather than being vastly ancient, the artificial formations he sees on Mars via NASA and ESA photos of the surface may range from 20,000 to one million years old, he estimated. This timeline, he continued, corresponds with the Exploding Planet Hypothesis, and the idea that a Martian civilization survived this cataclysm and migrated to Earth. Later, they returned to Mars, and the structures we see today are what they built on the dead planet to live in at that time, he suggested.

The idea of a raptor head or eagle crest (at the top of the Complex) relates to Aztec culture, he cited, and a four-sided formation at the site is pyramid-like and reminiscent of the Pyramid of the Moon at Teotihuacan. Another formation has a pentagonal shape, which he compared to the Pentagon building in Washington DC. One area has a circular shape next to a square, which would make it very unlikely that it could be naturally formed, he added. Mars' two moons are artificial as they have retrograde orbits, Haas theorized, and they were probably stations put there during an ancient war, referred to in Mayan texts. 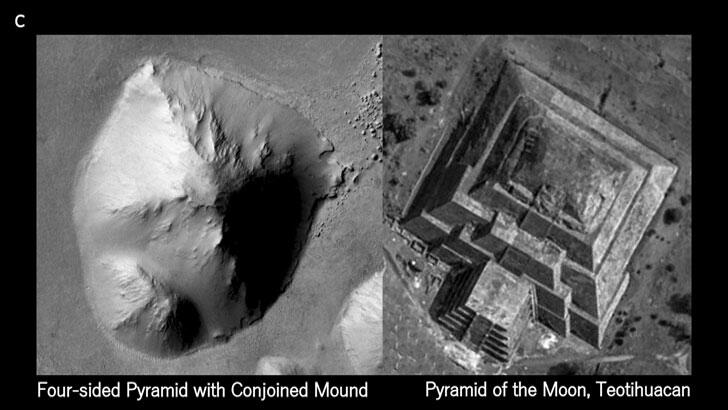 In tandem with the show, George Haas shared images of Martian anomalies. View the full set.

Certified ghost hunter John Kachuba has investigated hundreds of haunted locations throughout the world. In the latter half, he addressed his work researching the myths, magic, and meaning surrounding shapeshifters - people said to instantly transform into an animal or other type of being. Kachuba said he got interested in the topic during his research into ghosts, which often intersected with shapeshifting tales. He delineated two kinds of shapeshifters-- those such as werewolves who make an external transformation that can be physically observed, and internal cases where people believe and act as though they've transformed into something else while remaining human in outward appearance. Shamans would be an example of the latter type, such as the Bushmen of the Kalahari, who envision themselves as various types of animals.

A neolithic cave drawing depicts a deer with human-like features, and anthropologists have posited that ancient shamans could have ingested hallucinogens and tried to inhabit the minds of animals they sought to prey upon. Various creatures of folklore and myth are said to have shapeshifting abilities, like certain fairies in Italy known to bring blessings rather than the terror of something like a werewolf, he recounted. As research, Kachuba visited various countries like Romania-- associated with the Dracula novel. He delved into a 1751 book called "Treatise on the Apparition of Spirits and on Vampires or Revenants" written by a Benedictine monk, who also traveled around Europe investigating paranormal tales and witchcraft.