The Texas Rangers rode into existence in 1823, when Texas was still part of Mexico, and continue today as one of the most well-known of all law enforcement agencies. In the first half, journalist Doug J. Swanson offered a sweeping account of the Rangers, including their epic, daring escapades as well as some of their brutal and unsavory history. He pointed out that nowadays, the Rangers are a professional organization with standards and training, and throughout their history, there were fine upstanding men among them. Yet, in the Rangers' past, he uncovered tales of atrocities, oppression, and corruption. In the early days, the Rangers acted as judge, jury, and executioner, he noted, while many of the first American inhabitants of Texas were from Southern states looking to expand the slave trade.

The Comanches, who were legendary warriors and horsemen, became the most fearful of the Indian tribes and battled the Rangers for decades. It wasn't until the Rangers began using Colt revolvers that they got the upper hand, Swanson detailed. There were many colorful characters among the early Rangers, including "Alligator" Davis said to wrestle a gator to death, "Three-Legged Willie," who used a wooden leg to walk as one of his natural legs was deformed, and Leander McNelly, who tried to instigate a war with Mexico. Rufus Perry joined the Rangers at age 14 and wrote a short memoir describing his battles with Indians. He claimed to be "shot with arrows and bullets so many times his own mother would not recognize him," Swanson recounted. Frank Hamer was one of the most famous Rangers, joining in 1906. After retiring from the Rangers, he achieved further notoriety for tracking and ambushing Bonnie and Clyde.

In the latter half, electrical engineer and ufologist Thomas M. Ferrario discussed the mysterious UFO hot spot in Missouri known as Marley Woods, which he investigated with the late Ted Phillips, one of the world's leading researchers of UFO trace cases. Activities at Marley Woods, which encompasses two adjacent ranches of 1200 acres, share similarities to Skinwalker Ranch with such reported anomalies as balls of light, unseen forces, and strange unidentified animals. There were 13-inch three-toed tracks that would go out onto the thin ice of a pond and inexplicably terminate in the middle, he recalled. There were also extreme cases of animal mutilations and microwave energy. In one instance, Ferrario continued, witnesses saw six hooded figures at an adjoining private cemetery. The caretaker approached and observed a wolf-like face in the hood of one of the beings.

He described "light beam" phenomena on the property, in which a beam sweeps the fields as if hunting for something. On one occasion, Ferrario and Phillips were encompassed in blindingly white light while in their vehicle. When they got out, the light contracted into a pinpoint. He believes they suffered from health effects due to the contact-- Ferrario ended up having eye problems, which were attributed to possible microwave exposure. For more, check out these related photos. He also talked about the Moonshaft project in the Tatra Mountains of Slovakia that involved the shocking discovery of an ancient "mechanical" structure embedded into cave rock. 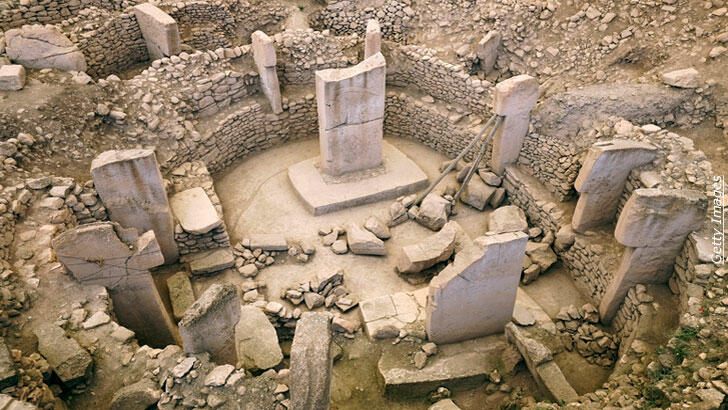 George Knapp shares recent items of interest including an article about Gobekli Tepe, considered one of the oldest structures in the world: