Space journalist Eric Berger, based in Houston, was a 2008 Pulitzer Prize finalist for his coverage of Hurricane Ike in the Houston Chronicle. In the first half, he discussed his research into Elon Musk and his company SpaceX, which has jumped to the forefront of commercial space development and exploration. Musk grew up in South Africa, and sold his hugely successful company PayPal early on, and then formed SpaceX in 2002. "His goal from the beginning was to send humans to Mars," Berger noted, which was very audacious back in 2002. Musk, he continued, embarked on a different way of doing things right off the bat, creating rockets without government funding in a very efficient fashion at a much lower cost than ever before.

At this point, SpaceX is NASA's most important contractor, launching humans into orbit, as well as delivering cargo to the International Space Station. "If we do succeed in going back to the moon, SpaceX will play an important role," Berger added. Perhaps SpaceX's best achievement is their development of reusable rockets, he cited, which they perfected after a number of failures. Their fully reusable upper-stage rocket named Starship could be refueled while in orbit and possibly go on to Mars. Another of SpaceX's intriguing projects is their Starlink satellite. Musk is trying to put thousands of these mini-fridge-sized satellites into low Earth orbit to deliver high-speed Internet signals across the planet, Berger explained.

In the latter half, author and investigative researcher Paul Bartholomew talked about the connections between various paranormal and cryptozoological creature sightings, and vintage 1970s cases of high strangeness. A major UFO flap began in October of 1973 that included the alien abduction Pascagoula case, Major Coyne's helicopter close encounter, and sightings of V-shaped objects in the Rochester, New York area. A Rochester astronomer, Terry Dickinson, confirmed that something unusual was in the skies, said Bartholomew. In Freeport, Long Island, three police officers chased several objects in the sky that merged into a smaller vehicle. They estimated the speed of the craft at around 7,000 mph.

A landing case in Glen Lake, NY involved concentric circles (pictured below) found in a restaurant parking lot in 1973. Residents heard mechanical noises in the nearby woods that night, and curiously the hot and cold water taps in the restaurant reversed in temperature for two weeks following the incident. In 1976, there was a "Bigfoot outbreak" in Whitehall, New York (Bartholomew's hometown), in which a large anomalous creature was initially sighted by three teens, followed by a dozen more reports over time. Bartholomew noted that while some people's encounters with Bigfoot or UFOs were life-changing, they often considered the overall experience to be negative as they tend to be disbelieved or keep the story bottled up. Correlating high strangeness events, there could be different manifestations from the same source phenomena, he suggested. 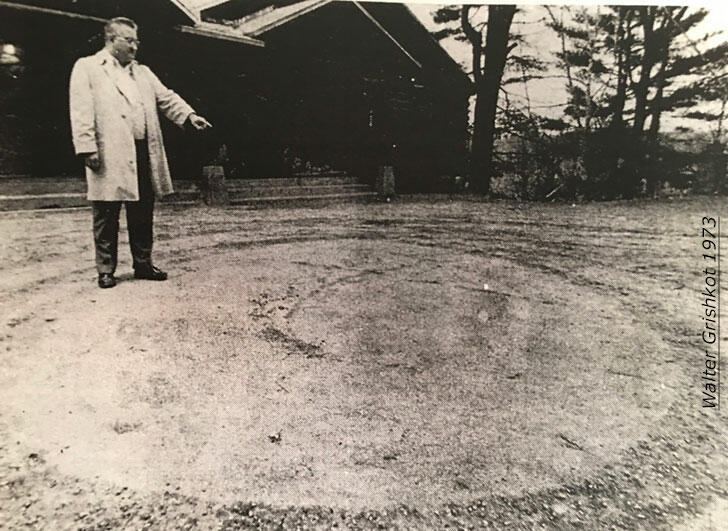 Paul Bartholomew shared images in tandem with his appearance. Pictured here are the anomalous concentric circles found in a parking lot in Glen Lake, NY in 1973. View the full set of photos.