In the first half, scholar of occult and esoteric ideas, and PEN Award-winning historian, Mitch Horowitz explored the secret teachings of Manly P. Hall, including his theses about Atlantis, mysterious beasts, secret societies, the timeline of ancient Egypt, Tarot, and the influence of Freemasonry. During his lifetime (1901-1990), Hall was not well-known, he noted, but his 1928 700+ page illustrated tome, "The Secret Teachings of All Ages," has actually been discovered by more readers since his death. Hall's book is a "vast compendium of occult and esoteric wisdom," Horowitz continued, with hundreds of encyclopedic entries. President Ronald Reagan was said to adopt some of his ideas from Hall's books, he reported, and oddly enough, the CIA revealed that Secret Teachings was found on the bookshelf of Osama bin Laden. This was "probably because within Manly's book, there's a theory that America was the product of certain secret societies," which fed into some of bin Laden's conspiracy theories, Horowitz surmised.

A kind of "universal librarian," Manly Hall pulled together the ideas of Aristotle, and Native American, Mayan, and Egyptian wisdom traditions. Horowitz correlated the West-Schoch theory that the Egyptian sphinx is far older than generally believed with Hall's timeline for an ancient Atlantean civilization. While the Tarot deck was created in the early Renaissance, the cards' images tap into something archetypal that can be recognized across civilizations, Horowitz commented. He added that such pictorial devices might catch a multidimensional moment in time that imbues them with a divinatory power. He also touched on his 10-Day Miracle Challenge, a powerful technique to achieve a specific goal.

In the latter half, biblical paranormal researcher Jason McLean discussed sightings of mysterious creatures and cryptids in Texas. The reports seem to offer a mix of both scientific and paranormal aspects, he cited. One early report he recounted came from American hero Davy Crockett, who in a letter to a relative, described an encounter with a Bigfoot-like creature that disappeared into the foliage near Nacogdoches. There have been many Sasquatch reports in various parts of Texas, including the Lancaster area near Dallas, where a huge hairy creature was seen looking over a family's fence. Later, the family heard an eerie unidentified howl echo through the neighborhood, McLean detailed.

Tales of the 'Goatman' in North Texas at first seemed synonymous with Bigfoot, he noted, but then took off with their own lore, with some people encountering a 7 ft.-tall goat-human that resembled Pan of Greek mythology. There were also reports of La Lechuza, a giant owl with the face of a woman, which was said to stalk and terrorize a young lady near downtown Dallas for one week. Long-tailed pterodactyl-like creatures have been seen as well, he added. In some cases, he wondered if our vision was being manipulated-- people could be seeing something paranormal that alters their perceptions. McLean said he helped a man tormented by a supernatural entity during sleep paralysis episodes-- a gaunt 7-ft. tall being with a long skull. Curiously, several neighbors and the man's daughter all described seeing a similar creature. 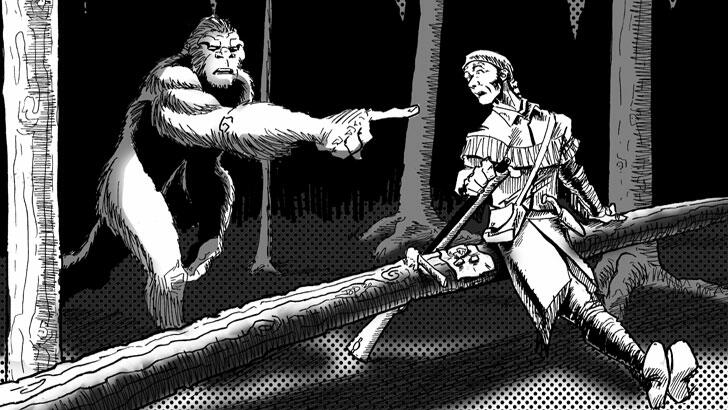