In the first half, UFO investigator and Colorado MUFON State director Katie Griboski joined George Knapp to discuss the nature of researching UFO/UAP reports, and the obstacles in investigating them. Griboski recounted the story of how her own encounter with the paranormal at Colorado's Clearwater Ranch as a child led her to research the experience as an adult. In the process, she discovered the writing of Leo Sprinkle, a pioneer in the study of alien abductions who had done research on the high strangeness at Clearwater. The access Griboski was able to get to Sprinkle's archive, in turn, introduced her to numerous letters, which she found fascinating and extremely valuable, that he had exchanged with others in the course of his work.

Focusing on such archived letters allowed Griboski to glean compelling insights into the way paranormal encounters are reported and studied. By reading Sprinkle's correspondence over decades, for instance, she was able to track the development of his knowledge and thinking, she said. Analyzing large volumes of letters also reveals common threads in the reports of experiencers all over the world, Griboski noted, which lends credibility to their accounts and highlights details that may have seemed minor until they are understood as a pattern.

In the latter half, screenwriter and producer Bryce Zabel discussed the fast-breaking developments in the current UAP story, as well as how disclosing the truth to the public about the UFO phenomenon will change the world in the years to come. Convinced that human history is at a major crossroads as we anticipate the US government's intelligence report on recent UAP sightings, Zabel said we should be prepared for transformations—and disruptions—across the spectrum of political, intellectual, scientific, and cultural life. He also suggested that one reason we should be excited and optimistic about this particular moment in our understanding of an alien presence on Earth is that we have moved past questions of whether UAP are real or not, as well whether they're simply crafts belonging to the United States or another country. We're now in the phase of being confident that the latest UAP are not of the Earth, so it's time to ask who exactly these visitors are, and where they come from, Zabel explained.

Although he doesn't anticipate that the government's report, due out sometime this June, will necessarily be revealing or monumental in itself, Zabel argued that its release will set a number of other events in motion that will force the issue toward full disclosure within a few years. The growing interest by the mainstream media in the report, for example, means that major news outlets will use their considerable resources to devote time and attention to getting answers about the UAP. Concerned that possible alien activity may endanger national security, Zabel speculated, members of Congress will also probably investigate the question of alien visits more thoroughly. A "disclosure race" between the USA, Russia, and China could emerge as these countries work to be the first to negotiate peaceful, productive relationships with visiting extraterrestrials, he predicted. Related article. 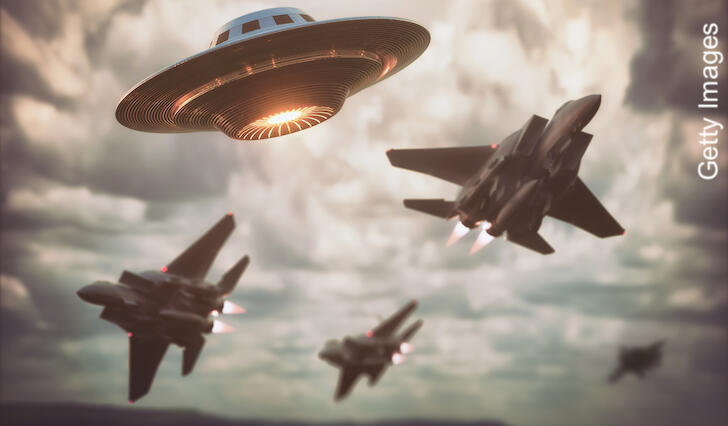 George Knapp shares recent items of interest, including the military's encounters with monsters: