2020 was a breakthrough year for UFO research and investigations. Three veteran UFO experts: Rich Hoffman, Robert Powell, and Kevin Knuth, with the Scientific Coalition for UAP Studies (SCU), joined George Knapp for a wide-ranging 4-hour program looking ahead to what 2021 might bring in regards to UFO revelations. They also reviewed recent ufology history, the greater acceptance in scientific circles, intriguing cases, and recovered metamaterials. Started in 2017, the SCU is a non-profit think tank composed of scientists, researchers, and professionals. Knuth (who appeared in just the first hour) became interested in the subject as a physics graduate student in Montana in 1988, when he heard reports of mysterious nearby cattle mutilations associated with UFOs.

The Nimitz 2004 'Tic Tac' sighting has been a game-changer in the UFO/UAP field, Powell noted. He started studying the case in 2016 (before the New York Times broke the story in 2017), issuing FOIA requests to gather more information. According to Knuth's studies of the data, the object or craft was moving at 75g's (g-force) of acceleration, much faster than any known aerial technology. Based on this, Knuth estimated that it would require 1100 gigawatts (1100 billion watts) of power to perform some of its maneuvers (the maximum power output of the entire US is just 90 gigawatts). "The characteristics of this object's flight," said Powell, "at tens of thousands of miles per hour at low atmosphere...should have been like a fireball or meteor burning up in the atmosphere. We have no metals that can survive movement through the atmosphere at that speed."

Hoffman talked about how in an incident from Aguadilla, Puerto Rico, an object split into two, and one part hit the water at around 100 mph, and then re-emerged out of the water at high speed. There was no rocket engine to propel it out of the water, Powell added, as nothing showed up on the infrared video. Reportedly, the US Navy has come out with a statement asking their pilots to share sighting information as new cases emerge, but Powell suspects there could still be a stigma about coming forward. Powell also delved into his extensive research into the 2008 Stephenville, Texas UFO case, which had multiple witnesses and compelling radar data that backed up the testimony details. He calculated that the craft moved from 0 to 1900 mph within ten seconds or less.

One of the Stephenville witnesses, a policeman, said the object was a "city-block long"-- so large he couldn't make it out its shape in the sky. It was horizontally positioned and then turned vertical before taking off in flight, Powell recounted. There was also discussion about the possible evidence for metamaterials-- strange, non-terrestrial materials allegedly retrieved from UFO crash sites. Hoffman cited the 'memory metal' reportedly found at Roswell, and other materials said to have isotopic ratios not found on Earth. Powell described the 'Ubatuba' sample purported to come from a flying disk that exploded in Brazil in 1957. Tests showed that it had an unusual composition with nearly pure levels of magnesium. 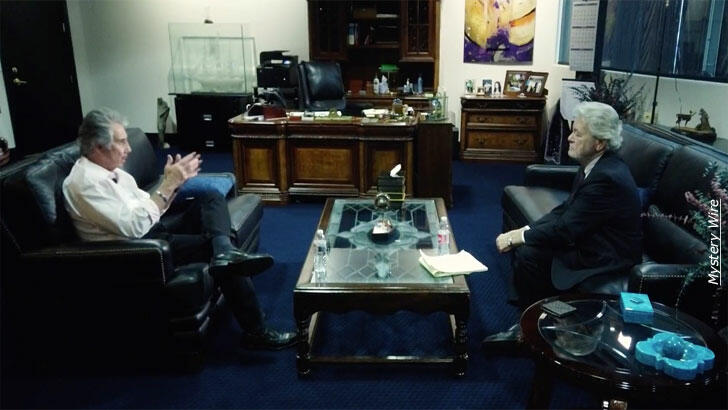 George Knapp shares items of recent interest, including revelations from his interview with Bob Bigelow: