Adventurer and journalist Robert Young Pelton is known for his entry into the world's conflicts over the last 25 years. In the first half, he discussed how the Russian invasion of Ukraine is part of Putin's decades-long plan of shifting the world order and its effect on the dollar, petroleum, and commodities prices. The attack on Ukraine was calculated to enrich Putin personally, and destabilize the West just as it was about to recover from the pandemic, he stated. Pelton connected Putin's actions with the "1922 Memo" developed in the United Arab Emirates (UAE)- a secretive plan to move away from the global dominance of the dollar in oil markets and economies and create ongoing chaos and uncertainty damaging to wealthy Western nations. Dramatically driving up the price of oil, Putin's move into Ukraine was done not only for his benefit but for the "petro-dictators" in Saudi Arabia and UAE, he suggested.

Pelton believes that Putin will continue invading countries after Ukraine, and will probably go into Moldova or other small nations next and that he will not be deterred until NATO or US forces stop him militarily. "The thing we have to do," he continued, "is the same thing they're doing. We have to create chaos. We have to basically topple the Russian leadership." It's not the Russian people that are invading Ukraine, it's "Putin's military mechanism," Pelton explained. Right now, the US is supplying excellent military intelligence to Ukraine, he noted.

Investigative reporter and former long-time editor of Reader's Digest, Randall Fitzgerald has been researching and writing about extraterrestrials, the nature of consciousness, and the origins of civilization for over 30 years. In the latter half, he shared his latest work compiling ET contact theories, evidence, and case studies. He connected human consciousness to the alien phenomenon. An example of this is the "hitchhiker" effect documented at Skinwalker Ranch. After witnesses saw such things as orbs and poltergeist manifestations at the site, the phenomena seemingly followed them home. "It was as if human consciousness had interacted with the phenomenon and then brought it back to their own separate realities," he said. Fitzgerald spoke about his interest in skeptics and debunkers, and featured debates on UFO cases in his "Second Look" magazine in the late 1970s.

He delved into several specific UFO cases, including a curious sighting in Washington DC. A 1950s UFO channeler named Frances Swan was said to channel an entity named Affa, and eventually she attracted the attention of the CIA, and taught one of the officers to channel the alien being. When asked to provide some kind of proof, the officer speaking as Affa, pointed to the window where a silvery object in the sky was said to appear promptly. Fitzgerald revisited his research into the Phoenix Lights-- he theorized that five independent lights traveling together may have been a holographic experiment originating from the psychological warfare military training unit near Tuscon. Fitzgerald also detailed how in 1975, he went undercover, working as a reporter for The National Enquirer to investigate the Mafia and CIA connections of the tabloid's publisher, Generoso Pope Jr.

In Memory of Art Bell

Art Bell, the creator of "Coast to Coast AM," passed away on today's date four years ago. Called the "mysterious narrator of the American nightscape" by the Washington Post, he is truly missed. Pictured below is an honorary memorial plaque placed in a park in Pahrump, Nevada, the town where Art famously conducted many of his broadcasts from his desert compound in the "Kingdom of Nye."

At the end of the show, George played a special recording of "Thanks for the Memories" with lyrics adapted as a tribute to Art. 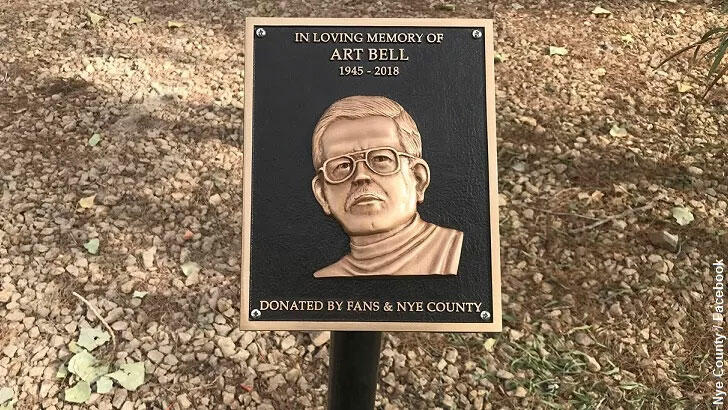