Journalist and documentary-maker Jenny Kleeman has explored innovations that are changing what it means to be human. Focusing on the central pillars of the human experience–birth, food, sex, and death, she joined Ian Punnett (Twitter) to discuss some truly amazing (and perhaps worrying) technologies. These included babies grown in artificial wombs, lab-produced meat, automated death machines, and sex robots. She described some of the robots as having "animatronic heads with quite sophisticated AI," placed on the body of a hyperrealistic sex doll. The robots offer more in the way of companionship than simply a sex doll, she explained. In her research, she interviewed "the Elon Musk of sex robots," Matt McMullen, who created the highly customizable "Real Dolls," and a prototype sex robot named Harmony.

In contrast to something like veggie burgers, "vegan meat" consists of real meat that is grown in a lab derived from cultured biological cells of a living animal. This past December, lab-made "chicken nuggets" were approved for sale in Singapore. Kleeman tried out the product in an earlier version and noted that it did taste like chicken, but the texture or mouthfeel felt off. Products such as these may offer an alternative to the unsustainable practices of industrial agriculture, she pointed out.

Kleeman reported on the Sarco 2.0 'death machine' (pictured below), a concept device that can be produced on a 3D printer. While such an "oxygen deprivation" machine has not yet been tried out, its inventor Dr. Philip Nitschke is a right-to-die advocate who believes that assisted death should not solely be in the province of doctors. The Sarco doubles as a biodegradable coffin. She also discussed technology in the works that may allow people to grow their babies outside of the womb in a kind of "birth sack." While the various technologies she researched may have benefits, she believes that the entrepreneurs behind some of them are "selling people the illusion of control over the uncontrollable" and circumventing or distracting from the issues they're said to be solving.

In the first hour, author Robert Zubrin, the founder of the Mars Society, shared updates on the Red Planet, and the missions arriving there this month. Regarding NASA's Perseverance mission (due to land on February 18th), he's particularly excited about its miniature helicopter, which can cover much greater distances than the standard land rover. There are also new types of instrumentation aboard that may be able to identify micro-fossils. In addition to the new American mission, United Arab Emirates currently has a satellite orbiter around Mars, and China has an orbiter and rover. Zubrin also talked about what it will take to set up a sustainable colony on Mars and how SpaceX's reusable rockets with larger payload capacities may pave the way. 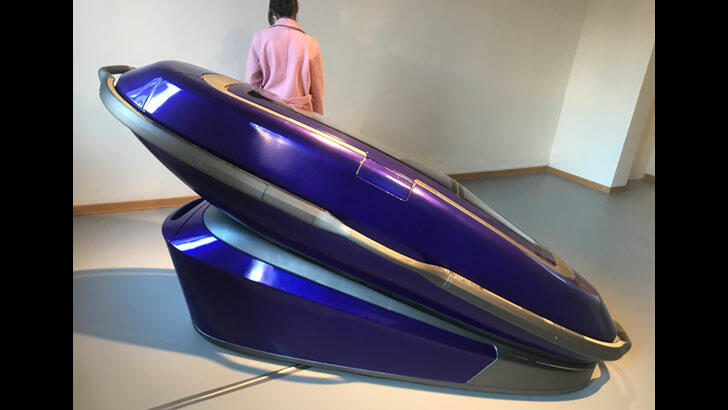 Kleeman shared photos from her new book, Sex Robots & Vegan Meat. Pictured is Sarco 2.0, a machine developed by Dr. Philip Nitschke, AKA Dr. Death. Sarco promises to give users a peaceful death at a time of their choosing. It was on display for the first time at Venice Design 2019. View additional images.