In the first half, filmmaker, lecturer, and founder of the world's largest pet health page on Facebook called Planet Paws, Rodney Habib discussed the health of dogs, and his findings about the chronic diseases afflicting them. According to statistics, the average lifespan of a dog has dropped from 12 years to 11 years. In his recent research, he sought to find some of the oldest dogs and learn the secrets of their longevity. One of them is a golden retriever from Australia that has reached the astonishing age of 31. Almost all these long-lived dogs had a fresh food diet (rather than dried kibble), often sharing the same meals as their pet owners. Typically, dogs that are mixed breeds live longer than purebreds, he added. Pets can be over-vaccinated, Habib suggested. They used to receive single courses of vaccines in the past, but now they are prescribed yearly doses.

A pet's environment can also affect their health, he pointed out. Things like household cleaners, chemicals, air fresheners, and scented products may take a toll on dogs and cats. Canines are sensitive to stress in their pet owners and home environment, and this too, can affect their well-being and longevity, Habib said. Positive steps owners can take include making sure their dogs get plenty of exercise, and mixing some fresh vegetables into their food several times a week. Habib and his co-author, veterinarian Dr. Karen Shaw Becker, provide healthy dog food recipes on their website.

In the latter half, paranormal investigator and demonologist John Zaffis talked about haunted objects and the havoc they bring to unsuspecting collectors, as well as his work with the late Rosemary Ellen Guiley, and his aunt and uncle, Ed and Lorraine Warren. Back in the day, the Warrens would work on 10-20 cases at one time, he recalled. Most recently, the distinct voice of Lorraine (who died in 2019) was heard through a 'Ghost Box,' he reported. Regarding haunted objects, sometimes old items like a chair or statue may have had a great deal of meaning for its owner, in a time when things such as these were scarce. "A lot of times their energy can remain with an item," he explained, but it stays dormant until it's suddenly triggered by a new owner. He views such objects as having a "spirit energy attachment" rather than being haunted by an individual spirit.

The Warrens, he continued, discovered the notorious doll Annabelle, whose name was spelled out on a Ouija board. The doll may have been connected with a spirit of a girl with the same name who was killed in a car accident nearby. Dolls, in particular, seem to hold onto energy, he noted, citing some of the lore around Robert the Doll. Robert was made for a young boy by his nanny, and he kept the doll for his entire life, even setting up a separate bedroom for him. Zaffis was given a doll from Gettysburg that was around 100 years old-- he set it on a chair in his display room, and when he returned, it was smashed on the floor, though no one had been in or out of his museum. His new book, co-written with psychic medium Debbie Elward and Rev. Larry Elward, documents cases they investigated together, including deceased human spirits causing hauntings (rather than demons). 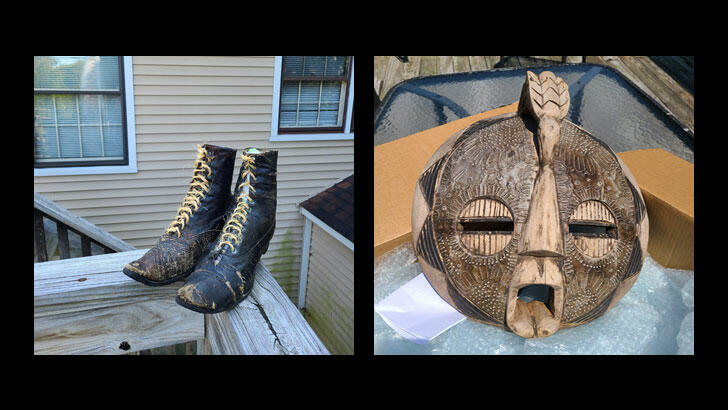 Check out a selection of photos of haunted objects sent to us by John Zaffis.